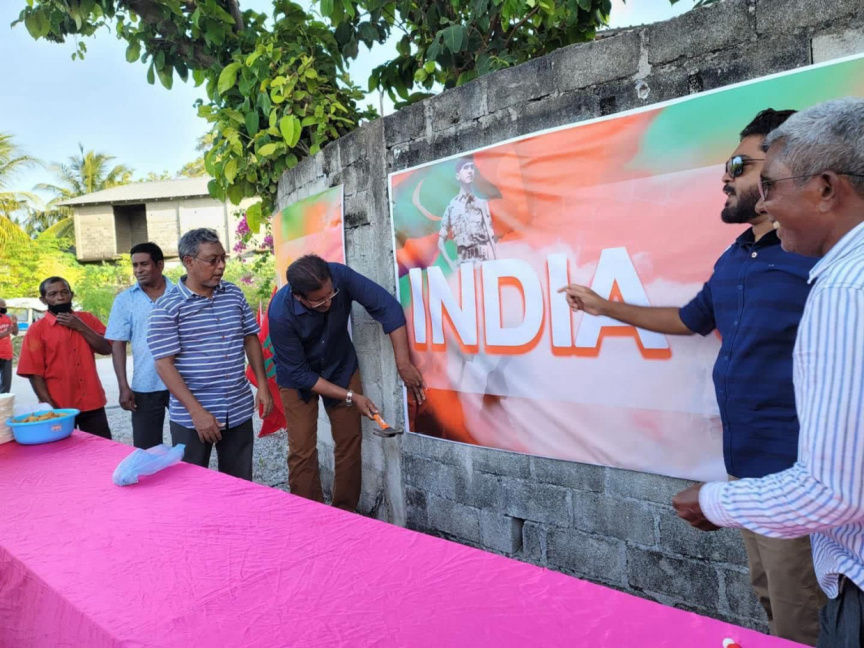 Kulhudhuffushi City Mayor Mohamed Athif says he finds the use of photos of Martyr Hussain Adam for political purposes unacceptable.

Martyr Hussain Adam is a celebrated national hero who died defending the MNDF headquarters during the 1988 coup d'état.

His photo was used in posters pasted on walls of houses in Kulhudhuffushi City under the opposition’s ‘India Out’ campaign – a move which has sparked criticism.

Mayor Mohamed Athif said that he, as a son of Kulhudhuffushi, found the use of Martyr Hussain Adam’s photo to promote the agenda of a political party which has a foreign policy discriminatory towards a specific country, unacceptable.

He called for the opposition to immediately cease the use of Martyr Hussain Adam’s photos for their campaign.

“Martyr Hussain Adam of Kulhudhuffushi’s Maavaage is someone who used his chest as a shield to save the Maldivian people and Maldives, and who became a martyr after getting killed by multiple bullets,” wrote Athif in a social media post.

Athif said the river of Martyr Hussain Adam’s blood trailed across Maldivian soil garnering prestige for the people of Maldives, and especially the people of Kulhudhuffushi.

The government has repeatedly condemned the ‘India Out’ campaign led by the opposition to protest against the presence of Indian military personnel in Maldives.

The government has warned that spreading hatred and false allegations regarding bilateral ties with neighboring countries not only tarnished the relations with allies, but also affected the safety and security of their citizens in Maldives, and Maldivians living abroad.