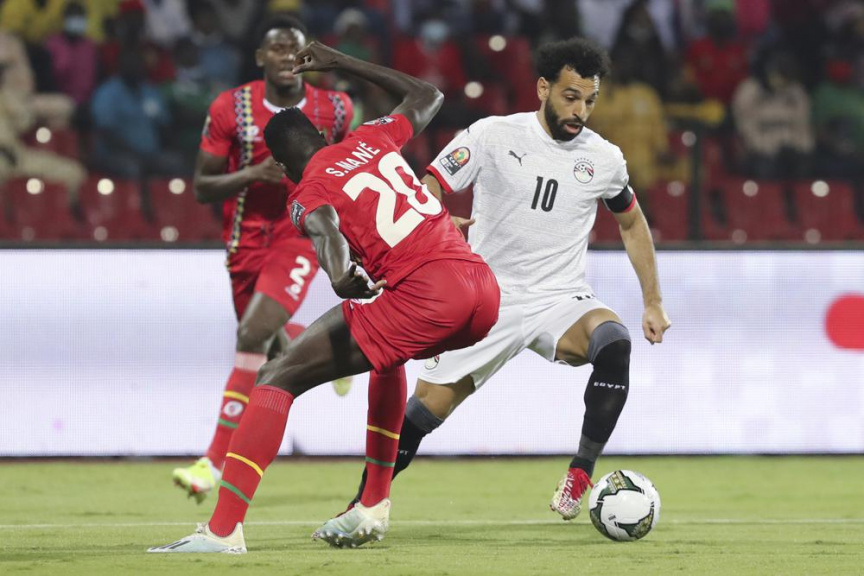 GAROUA, Cameroon (AP) — Mohamed Salah squeezed a volley under the goalkeeper to give a nervous Egypt a 1-0 win over tiny Guinea-Bissau, which was denied maybe its biggest result at the African Cup of Nations on Saturday when it had a brilliant late equalizer contentiously disallowed after a VAR check.

Salah’s breakthrough came in the 69th minute after the record seven-time African champion labored to break down Guinea-Bissau.

But the Liverpool forward’s smart finish with his left foot from a tight angle wasn’t nearly the most dramatic moment of the game.

Guinea-Bissau forward Mama Baldé weaved in from the left wing and unleashed a shot that flew into the far corner of the net with eight minutes to go to seemingly stun Egypt, and the entire tournament in Cameroon.

But after a long delay, referee Pacifique Ndabihawenimana of Burundi went over to consult VAR and eventually disallowed the goal for a foul by Baldé on Egypt defender Omar Kamal.

Baldé had put a hand on Kamal’s shoulder as he forced his way past him on the way to scoring, but it was a tight, tight call.

Egypt survived another scare from a shot by Moreto Cassamá in what was just about the last kick of the game. Egypt goalkeeper Mohammed el-Shenawy dived to push it away with two hands and it was Guinea-Bissau’s last chance.

Egypt hit the post three times in the game, one of those by Salah in the first half, but the sense of relief for the Egyptians at fulltime was obvious.

The victory revived Egypt’s Group D campaign after it lost its opening game to Nigeria 1-0. But it was not the convincing reaction Egypt fans demanded and there was increasing pressure on coach Carlos Queiroz, the former Real Madrid boss.

In stark contrast to Egypt’s struggles, group rival Nigeria eased into the knockout stages earlier with a comfortable 3-1 win over Sudan.

Nigeria leads the group on six points and has achieved its first mission. Egypt has three points from its two games and is second in the group, but not yet assured of a last 16 place.

Nigeria became the third team through to the last 16 after host Cameroon and Morocco.

Samuel Chukwueze slotted home from close range in the third minute against Sudan, Taiwo Awoniyi made it 2-0 right on halftime, and Moses Simon scored the third in the first minute of the second half when he tucked the ball in from a tight angle on the left.

The Sudanese did get on the scoresheet in the 70th from a penalty by Walieldin Khedr, but there were never really any signs that a Sudan comeback might be possible.

Nigeria is developing into one of the favorites at the African Cup despite coming into the tournament without key strikers Victor Osimhen, Odion Ighalo and Emmanuel Dennis. The team also parted ways with coach Gernot Rohr last month and gave the reins to interim coach Augustine Eguavoen, who won the African Cup with Nigeria as a player in 1994.

Meanwhile, the Confederation of African Football’s disciplinary committee announced its first punishments for the tournament.

Ghana’s Benjamin Tetteh had an automatic two-match ban for his red card in Friday’s game against Gabon increased to three matches following his sending off after the final whistle for punching an opponent. Gabon scored a late equalizer for 1-1 and the game ended in a melee with players and officials pushing and shoving — and in Tetteh’s case, punching — in the fracas. Both teams were also given a warning by CAF.

Gabon was also punished for a different offense. CAF fined Gabon $20,000 for changing its team hotel without approval, which is against tournament regulations.

Also, Gabon coach Patric Neveu gave an update on the health of striker Pierre-Emerick Aubameyang, who was ruled out of the game against Ghana because of the lingering effects of COVID-19 having tested positive for the virus on his arrival in Cameroon.

The Gabon Football Federation had said Aubameyang and teammates Mario Lemina and Axel Meyé had “cardiac lesions” caused by COVID-19. But Neveu said they did not have heart problems.

“It appears as though the virus has left residue,” Neveu said. “Aubameyang and Lemina don’t have heart problems, but COVID may have left some waste.”