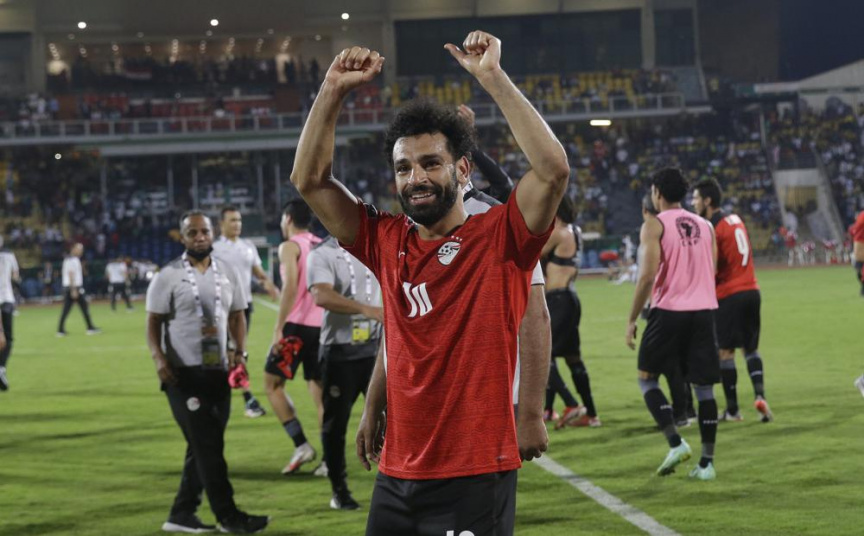 Egypt's Mohamed Salah, celebrates at the end of the African Cup of Nations 2022 quarter-final soccer match between Egypt and Morocco at the Ahmadou Ahidjo stadium in Yaounde, Cameroon, Sunday, Jan. 30, 2022. (AP Photo/Sunday Alamba)

YAOUNDE, Cameroon (AP) — The biggest stars of African soccer are on course to meet in their continent’s biggest game.

Mohamed Salah’s Egypt and Sadio Mané’s Senegal reached the African Cup of Nations semifinals on Sunday. One more win for both teams will see the Liverpool pair meet in the final.

Salah scored the equalizer and created the winner to inspire Egypt’s comeback to beat Morocco 2-1 after extra time in the day’s first quarterfinal.

Mané set up Famara Diedhiou for Senegal’s opener in a 3-1 win over Equatorial Guinea later at the same Ahmadou Ahidjo Stadium in Yaounde.

Substitutes Cheikhou Kouyaté and Ismaila Sarr finished off Equatorial Guinea, which had drawn level through Jannick Buyla a few minutes after having a penalty awarded and then taken away through a VAR check.

Egypt progressed to a semifinal game against tournament host Cameroon, a repeat of the 2017 final that Cameroon won. That game on Thursday will also be a clash between the two most successful sides in African Cup history with 12 titles between them.

Senegal plays Burkina Faso in the first semifinal on Wednesday, when Mané’s team will be aiming to make a second straight final. Senegal hopes to finally win one this year to get rid of its unwanted label as the best team to never win an African title.

Egypt fell behind to an early penalty won by Achraf Hakimi and converted by Sofiane Boufal in the seventh minute.

Egypt captain Salah reacted quickly to knock in a rebound to make it 1-1 in the 53rd and sent in a perfect low cross for Trézéguet to tap in near the end of the first half of extra time.

Egypt was left to rely on third-choice goalkeeper Mohamed Sobhy for most of extra time after an injury to Mohamed Abou Gabal, who was already in the team in place of No. 1 Mohamed el-Shenawy.

Abou Gabal was injured in normal time but tried to play through it. He couldn’t and had to come off in the sixth minute of extra time, leaving the 22-year-old Sobhy to make his debut for his country in the final stages of a high-pressure game.

In the end he wasn’t tested and Salah and Trézéguet combined for the winner four minutes after Sobhy came on. Salah was faced with three defenders covering him on the right wing but he went for the outside and sent a right-foot cross into the path of Trézéguet at the back post.

Trézéguet’s celebration was all about recognizing the brilliance of Salah. He kneeled in front of the Liverpool forward, put Salah’s right foot on his knee and pretended to shine his boot.

Egypt hasn’t won the African Cup since its record-extending seventh title in 2010. Salah made his debut for the national team the year after that triumph and is still searching for a first major title with his country.

So is Liverpool teammate Mané, although Senegal’s wait has been much longer.

Mané’s pass opened up Equatorial Guinea’s defense for center forward Diedhiou to score in the 28th.

Senegal appeared in control but got a first warning when captain Kalidou Koulibaly had a penalty awarded against him in the 50th minute. It was canceled by referee Victor Gomes after he saw on VAR that Koulibaly’s right hand was down by his side when the ball struck it.

Equatorial Guinea did get its goal seven minutes later but the introduction of Kouyaté and Sarr as substitutes paid off big time for Senegal coach Aliou Cissé.

Kouyaté put Senegal ahead just three minutes after arriving when he pounced on a miscued defensive header. Sarr finished after brilliant work down the left wing by Saliou Ciss.

That goal was also vindication for Senegal after insisting that Sarr join up with the squad at the African Cup of Nations despite his club Watford saying he was injured and wouldn’t be able to play at the tournament.

Sarr was sent to Spain by Senegal for treatment on a knee injury and will now be a part of the final stages of his country’s title chase.

Senegal will play Burkina Faso back at the Ahmadou Ahidjo Stadium. Egypt and Cameroon will meet at the tournament’s main Olembe Stadium across town in Yaounde after it was cleared to stage games again following last week’s deadly stadium crush.