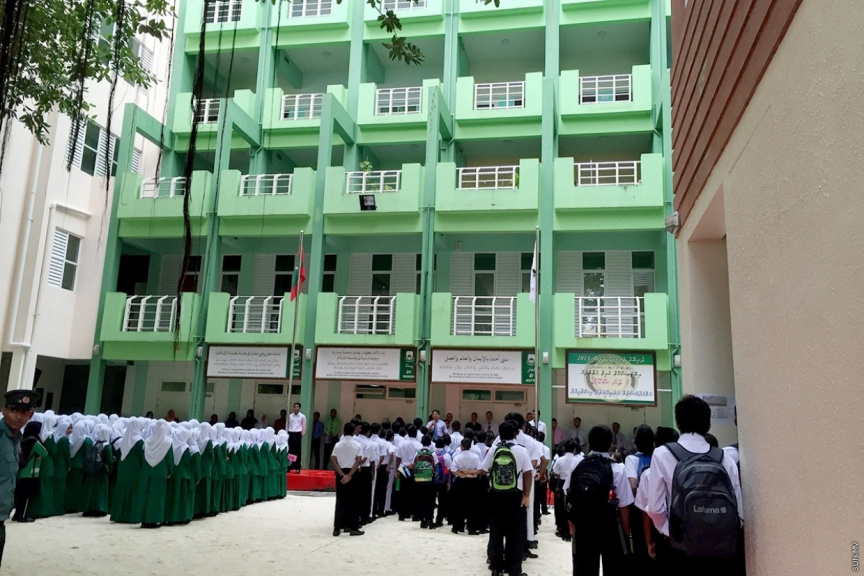 Parents of the students studying at Al Madhrasathul ArabiIyyathul Islamiyya (Arabiyya School) has stated that they are against the decision made by the Education Ministry to transfer Arabiyya School students to Izzudheen School.

Education Ministry announced their decision to temporarily transfer the students studying at to Izzudheen School, and one of the new schools being built at Hulhumale’ on Thursday.

In a statement released by Arabiyya School’s Parents-Teachers Association (PTA) in response to this – they said that the deteriorating conditions of the building the school is being run at have been being brought to the attention of Education Ministry starting from 2018.

The PTA said that not renovating the building despite this citing constrains in budget – is a willful negligence by the Ministry.

Noting that Education Minister Dr. Aishath Ali stated during a ministerial questioning session at the Parliament that students are under no immediate danger from the building on November – the PTA said that on the evening of the same day, the Minister had met with PTA’s Executive Committee (EXCO) and proposed to transfer Arabiyya students to Izzudheen School

As per the statement – PTA’s EXCO had responded to the requesting by stating that a decision can be taken on the matter after discussions with all parents, to which the Ministry had said that the decision will be taken in consideration of the views of the parents.

Therefore, they called out the Ministry in the statement, as their words and actions do not match up – for having done the exact opposite of what was promised.

The statement also stresses that Arabiyya School’s management and parents unanimously agree that it is not ideal solution for the students to be transferred to Izzudheen School for their education.

“Parents are very sure that if it is done so, the students’ education and the school amongst other things will experience major losses,” they had said.

On this note, the state said that the only solution they see fit is to make arrangements for Arabiyya students to study at another building, even if temporarily, without mixing them with students from other schools.

PTA also noted that they have requested the Ministry that Arabiyya students be officially granted a permanent building similar to that of students from other schools in Male’ City, by writing.

Arabiyya School building will need to be demolished