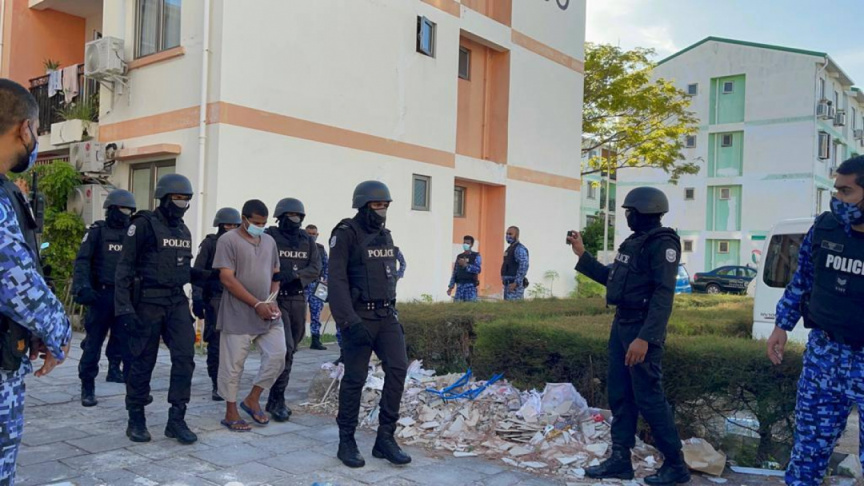 Adhuham Ahmed Rasheed, 26, in connection to the May 6 terror attack from a flat in suburban Hulhumale' on May 9, 2021. (Sun Photo/Ahmed Azif)

Criminal Court has sentenced the man who has confessed to detonating an IED in an assassination attempt on Parliament Speaker, former President Mohamed Nasheed, back in May, to 23 years, six months and nine days in prison.

He had faced 37 years in prison if convicted of the charges.

Adhuham signed a plea deal with the state, and confessed to all four charges.

Under the plea deal, the state withdrew two of the charges; conspiracy to carry out an act of terrorism, and attempted murder with a dangerous weapon.

Hearings in the case were held behind closed doors, citing potential threat to national security. However, the sentencing hearing, held on Tuesday morning, was open to public.

Opening the sentencing hearing, Criminal Court’s chief judge Ahmed Shakeel – who led the three-member bench which heard the case – asked Adhuham if he wanted to maintain the plea deal he signed with the state.

Adhuham responded that he wanted to maintain the plea deal.

The court found Adhuham guilty on the charge of carrying out an act of terrorism, and sentenced him to 20 years, six months and nine days in prison.

Adhuham had confessed to investigators he supported the international terror organization Islamic State (IS). The court found him guilty on the charge of supporting a terrorist organization, and issued a sentence of three years.

He was therefore sentenced to total 23 years, six months, and nine days in prison.

According to police, Adhuham detonated the IED using a remote from inside Athama Palace, located in front of the road where Nasheed’s private residence was located.

He was arrested from his home in Hulhumale’ on May 9.

Police released CCTV footage which shows Adhuham’s movements prior to, during, and after the attack.

The footage shows him talking on his phone moments before the attack. He was seen resting one of his bare feet on the wall. Police dusted the wall for prints, and said the footprint on the wall matched with his.

Adhuham told the court he accepts he committed a crime, and apologized, stating his actions were guided by his religious beliefs at the time.

“I apologize to President Nasheed, all those who got injured in the attack, and the beloved Maldivian people,” he said.

He also told the court he would not repeat his actions.

Police have said they found no evidence to suggest the attack had been financially motivated, and that the suspects involved in the attack believe Nasheed to be an apostate who openly mocked the religion of Islam and Prophet Mohamed, and that killing him to be justified.

Police also said that while they found evidence suggesting the suspects to be ISsympathizers, but found no evidence directly linking them to the terror organization.

Six additional suspects have also been charged in connection to the case.

Envoy: No breakthrough in probe into wider links

Abbas Faiz concerned over delays in May 6 attack trials