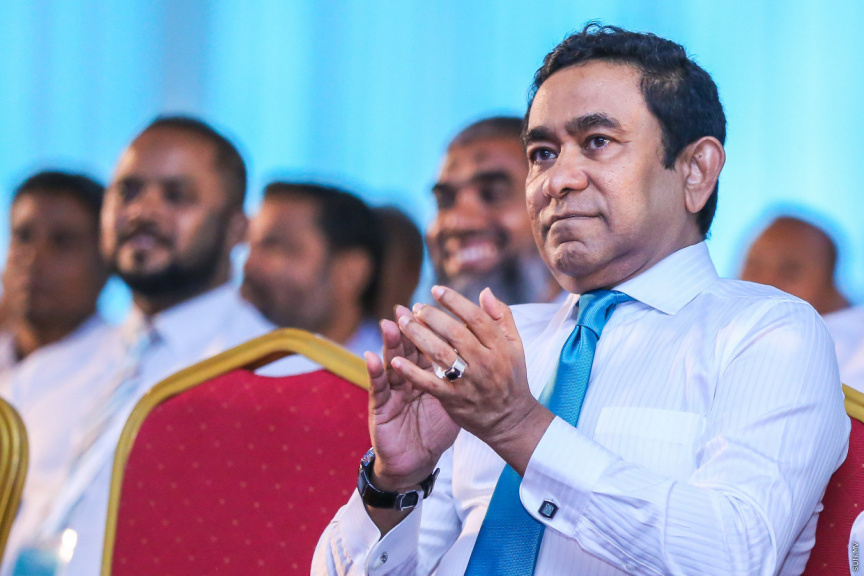 Criminal Court decided on Monday that there is no cause to have a travel ban order against former President Abdulla Yameen Abdul Gayoom pending the outcome of his trial.

Yameen, who recently regained his freedom after the Supreme Court overturned the money laundering conviction issued against him in 2019, is on trial on money laundering and bribery charges over the lease of R. Fuggiri for resort development.

He is accused of taking a USD 1.2 million bribe for the lease of Fuggiri, and laundering the money through Krik Riza (Kurikeela Riza), Ma. Kurikeela, Male’ City.

The prosecution filed a motion for a travel ban order against Yameen citing evidence he was planning on fleeing Maldives. The court held a hearing to hear arguments from the two sides over the motion at 09:00 am and again at 04:30 pm.

Chief Judge Ahmed Shakeel called a two-hour recess before coming back with his decision.

He denied the motion.

Judge Shakeel said that while the prosecution claimed the charges against Yameen was sufficient to warrant a travel ban order, there was no evidence to suggest he was planning on fleeing the country.

He also pointed out that the two passports the prosecution asked to be suspended had expired.

“It’s clear that the passports [the prosecution] requested to have suspended are expired. Therefore, there is no legal basis for a court hold something that does not exist,” he said.

Judge Shakeel also said that Yameen had no history of attempting to dodge court hearing.

He said that the prosecution could file a motion for a travel ban order again, if it finds any evidence Yameen was attempting to flee the country.