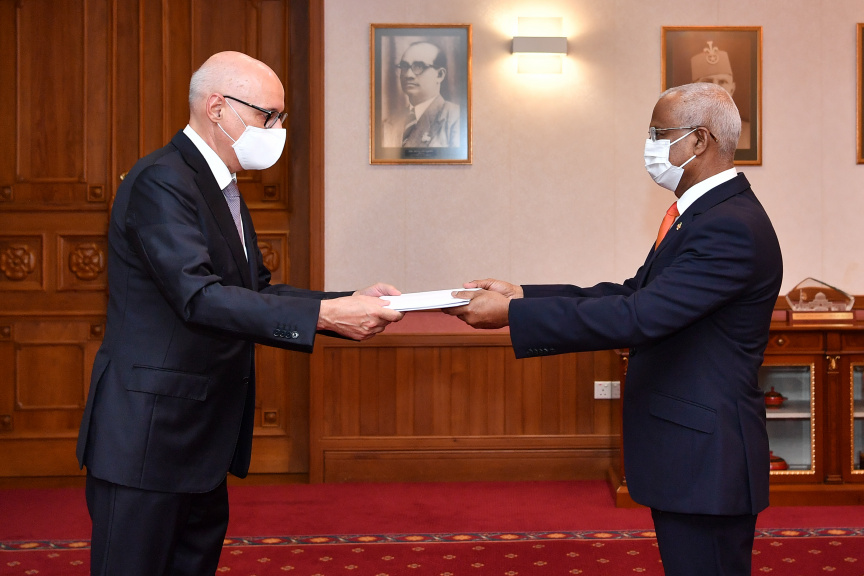 The new Swiss ambassador to Maldives, Dominik Furgler presented his letter of credence to President Solih in a ceremony at the President's Office on Monday morning.

President Solih welcomed Ambassador Furgler to Maldives and congratulated him on his appointment.

President Solih said that Switzerland is an important bilateral partner.

Noting the important role tourism plays in Maldives’ development, President Solih said that the country wished to broaden its tourist market in Europe.

He also highlighted on the importance attached by his administration in improving trade and investments between Maldives and Switzerland, and extended invitation for Swiss companies to invest in Maldives.

Ambassador Furgler expressed his desire to work closely with the Maldivian government in facilitating opportunities for Swiss investors to invest in Maldives.

Noting that direct flight operations from Switzerland to Maldives were expected to resume soon, Ambassador Furgler said that Maldives was a popular tourist destination for the Swiss.

Concluding the call, President Solih reiterated his commitment to further strengthening the long-standing bilateral relationship between the two countries.

The new Senegalese ambassador to Maldives, Abdoul Wahab Haidara presented his letter of credence to President Solih in a ceremony at the President’s Office on Monday afternoon.

In a meeting with Haidara afterwards, the ‎President welcomed him to Maldives and congratulated him upon commencement of his duties.

Speaking at the meeting, Ambassador Haidara expressed his delight in accepting his term in office and conveyed well wishes of the Senegalese President Macky Sall to President Solih.

He also congratulated Maldives for securing the Presidency of the 76th United Nations General Assembly.

Speaking at the meeting, President Solih said that the main interest of the Maldives lies in the improvement of economic and trade ties and to attract more investments into the country.

Ambassador Haidara said that Senegal could learn from the expertise of Maldives in promoting tourism and culture.

They also explored opportunities ‎‎for increasing cooperation between the Maldives and Senegal in the areas of ‎‎human rights and counter terrorism.

The new Turkish ambassador-designate Rakibe Demet Şekercioğlu also presented her letter of credence to President Solih in a ceremony at the President’s Office on Monday afternoon.

Welcoming the new ambassador and congratulating her on her new appointment, President Solih discussed a wide range of issues with her, including trade and commerce, security and counter-terrorism, education, and human resources development.

Maldives and Turkey established diplomatic relations on May 28, 1979. This year marks the 42nd anniversary of relations between the two countries.

President Solih expressed the importance accorded by Maldives to its relations with Turkey and expressed appreciation for the continued support and cooperation extended by the Turkish government.

He also expressed Maldives' interest in increasing trade and investment between the two countries and invited Turkish companies to explore investment opportunities in the Maldives. He went on to speak about strengthening cooperation in the tourism sector.

Speaking further, President Solih said that the rise of extremism, radicalism, and terrorism were growing concerns, and stressed on the need for the international community to work together to address the concerns.

He assured Ambassador-designate Şekercioğlu of Maldives' commitment to continue collaborating with Turkey and other friendly nations to combat terrorism, piracy, and other organized crime threats.

They concluded their meeting by expressing hope for renewed and strengthened ties between the two countries.