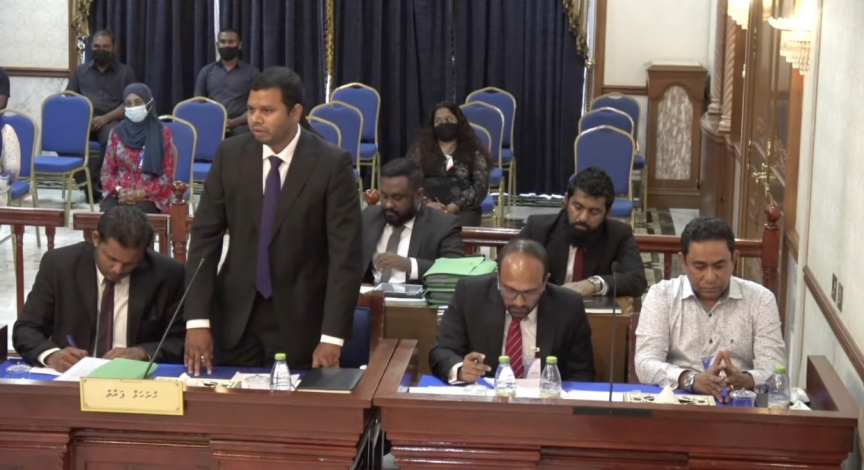 It has been revealed that the account number on the MVR 1 million cheque deposited to former President Abdulla Yameen Abdul Gayoom’s bank account – which provided the basis for the money laundering conviction against him – and the cheque number on the deposit slip do not match.

Yameen was found guilty of laundering USD 1 million from the sale of GA. Vodamula by the Criminal Court on November 28, 2019.  He was sentenced to five years in prison and fined USD 5 million. Yameen promptly appealed the conviction with the High Court, which sided against him and ruled to uphold the original sentence back in January.

The Supreme Court bench hearing the appeal had concluded hearings in October, and had said that the bench wouldn’t issue its ruling if there was nothing left of note to consider.

The bench convened a hearing on Thursday morning to clarify a discrepancy discovered in the account number on the cheque deposited to Yameen’s account.

The defense had previously also argued that the MVR 1 million deposited to Yameen’s account wasn’t related to Vodamula.

“The appellant clarified at court that the cheque in question wasn’t submitted. And the appellant, after this case was heard by the High Court, said that the cheque number in question was mentioned in the judgement details in a case involving charges pressed by the state against Abdulla Ziyath, and submitted the section on the judgement hearings which mentions the cheque number along with the appeal form and even presented arguments about it.”

He questioned why the number of the cheque linked with the case and cheque number on SOF’s account statement for the MVR 1 million deposit do not correspond.

Responding to the question, Public Prosecutor Ahmed Naufal admitted that the number on the MVR 1 million cheque and the cheque number in the account statement do not match, but said it resulted due to a clerical error.

Naufal said that though the cheque numbers do not match, the date and amount of the transfer from SOF’s account to Yameen’s account corresponds.

“The state believes there was an error with two numbers while entering it into the system,” he said.

Naufal said that the police who investigated the case had clarified the information from the bank, and that the bank too admitted that it was an error made in entering the number into the system.

However, Yameen’s attorney Abdulla Siyaz said the defense found the state’s claims unacceptable, and believe such an error would have been discovered in previous court stages.

The defense asked for the case to be settled in their favor without further discussion.

Yameen himself had been present during Thursday’s hearing, but did not speak.

Concluding the hearing, Justice Mahaz said the bench will make its decision before the court goes into recess.