President Solih: Government will always be an ally to private sector 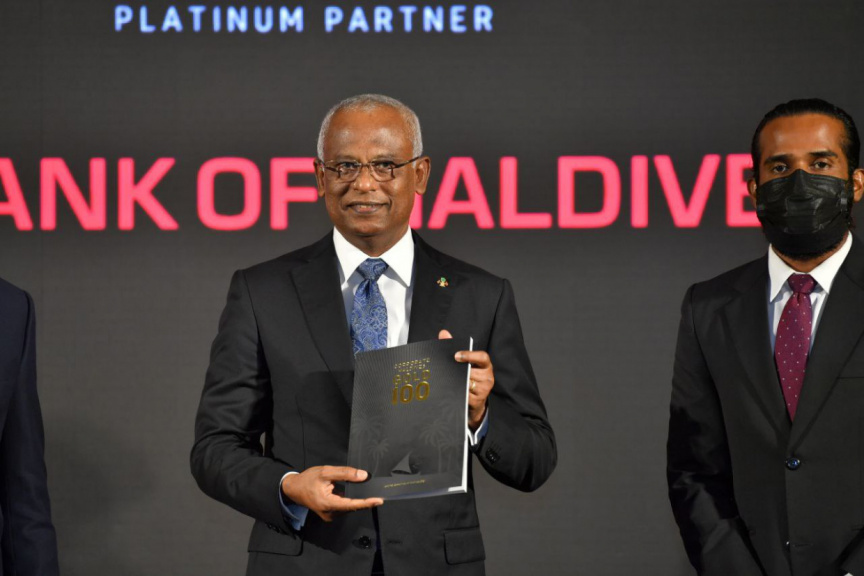 President Ibrahim Mohamed Solih had said that the government will always be an ally and a partner to the private sector of the country while speaking at the Gold 100 Gala by Corporate Maldives held at Crossroads Maldives last night.

“The government will always be an ally and a partner to the private sector. The businesses that received the awards tonight are innovative, future-conscious, strong and successful with emphasis given on carrying businesses resourcefully,” he said while speaking at the ceremony.

Moreover, the president stated that the tourism industry of the Maldives is world renowned. However, due to the COVID-19 pandemic resorts and guesthouses were left vacant due to the loss of tourist arrivals and with lockdown after lockdowns implemented in the country, restaurants and cafes had to be closed as well. This all resulted in businesses suffering massive losses.

He went onto state that despite businesses being active again, the country has not yet completely beat the COVID-19 pandemic.

“However, I can see a small ray of hope, as the number of tourists who had visited Maldives is 70% more compared to pre-Covid times,” he said.

He noted the ongoing hard efforts of the micro, small and medium-sized enterprises as they combat the losses caused by the pandemic, further noting that the positive results of there efforts are slowly becoming evident. He also mentioned that the government is not impassive and dormant during this time of economic crisis and that new businesses are being formed as well.

“God willing, we are moving forward. We are in the process of reviving the economy,” he said.

He pointed out that the government prioritized helping businesses of Maldives stay afloat during the most hard hit times of the pandemic, noting the ongoing aid given to business, small and large. Likewise, he noted the efforts on the business' part in keeping the Maldivian economy afloat.

Finally, he mentioned the countless benefits the businesses which received the awards at the gala have had on the economy and the development of the country and most importantly the especially tremendous positive impact they have had on the locals.

Corporate Maldives’ ‘Gold 100 Gala’ to be held on Oct.

JAAH appointed as the real estate partner of Gold 100