Speaker Nasheed: Only 4 bills submitted so far, unlikely any more will be submitted 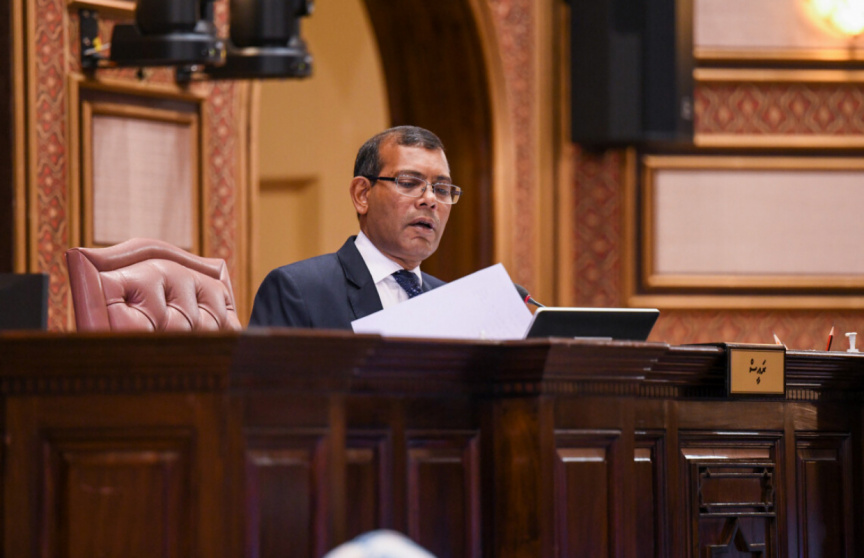 Noting that only four bills have been submitted to Parliament in its third session for the year by the government, Parliament Speaker Mohamed Nasheed has stated that it is unlikely that any additional bills would be submitted.

Speaking at today’s sitting regarding the work of the Parliament – Nasheed noted that the government had earlier informed plans to submit 32 bills in its third session for the year. However, Nasheed stressed that only four bills have been submitted up until today.

“I think it is unlikely that these bills will be received to Majilis within this session. Work on the bills that have been received however, is going forward at a speedy rate; especially the Evidence Bill and Bill to amend the Civil Procedure Code,” he had said.

Speaking further, Nasheed said that works of the parliamentary committees are underway at an ideal speed – however, stressed that matters which need to be addressed at the floor have been decreasing.

The government had earlier informed that they planned to submit 32 bills to the Parliament during its third session of the year via a letter sent to Deputy Speaker, North Galolhu MP Eva Abdulla by the President’s Office.

Some of the bills highlighted in this regard are:

Government also noted plans to submit 16 more bills in addition to what is penned down in the list.

Nasheed hints at a constitutional referendum before '23

'Majority believes courts are being reformed'