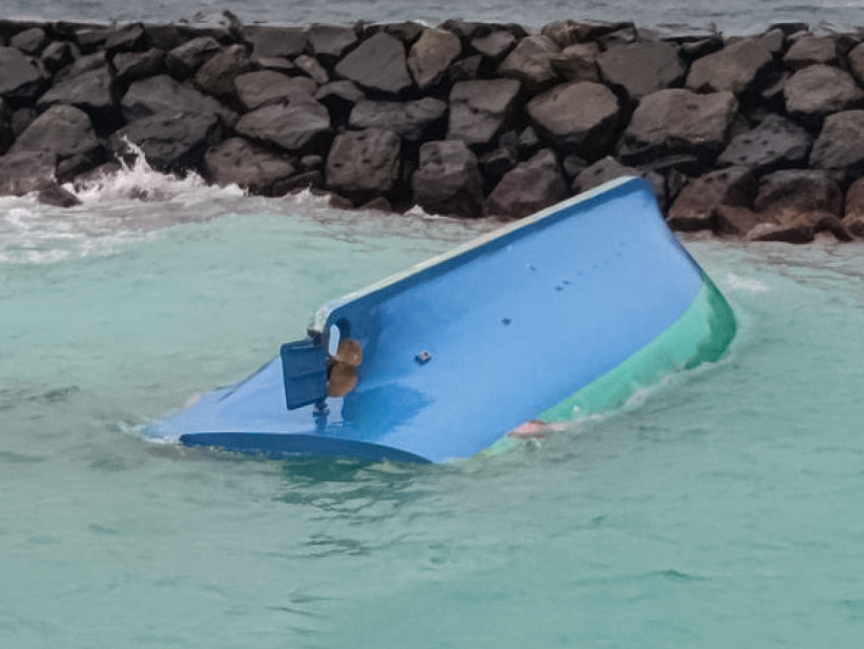 A boat has capsized at Sh. Feevah harbor channel today.

Feevah Council Vice President Ahmed Manik told Sun that the boat was traveling from HDh. Kulhuduffushi to Feevah when it had capsized Feevah harbor channel. He further detailed that it was a fiber boat measuring approximately 45-foot.

Manik also noted that the incident occurred at around 5:00 this evening. Highlighting that three Maldivians were on board at the time of the incident – he stressed that no one was hurt. They were traveling to Feevah to obtain a sprain needed for an excavator that is in operation at Kulhuduffushi.

“They were entering the harbor channel when a high-wave knocked the boat upside down,” he said.

The Council said that with help of Feevah residents – the boat has now been transported inside the harbor. They are also working on re-floating the boat using a highmark.

This incident has occurred amidst an increase in marine incidents as Maldives continues to experience heavy rain, strong winds and rough seas – some of which have resulted in fatalities. A 59-year-old man who was fishing on the jetty outside the local market in Male’ City died earlier on Monday, after he got thrown into the waters due to strong winds. And a 33-year-old woman died on Thursday, after getting thrown overboard while travelling to V. Fulidhoo. Her four-year-old son remains missing.

The Coastguard has advised seafarers against travel, unless absolutely necessary.