Young soldier’s body brought to Maldives, to be buried after Magrib 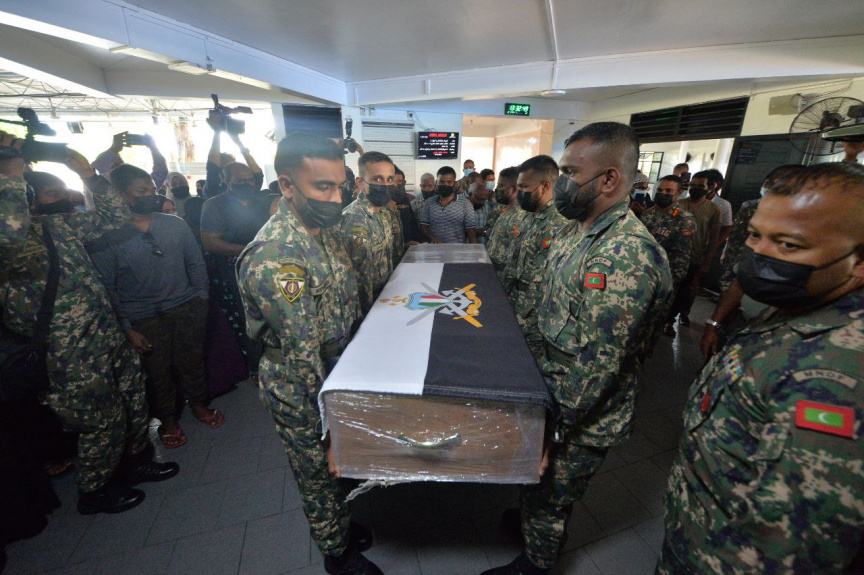 The body of a young Maldivian soldier who died while undergoing training in India last Saturday has been transported to Maldives for burial.

The body of Lance Corporal Mohamed Sultan, 22, Rosemead, AA. Himandhoo, was brought to Maldives at 12:43 pm this Monday.

Maldives National Defense Force (MNDF) states Sultan’s body will be buried after military funeral honors ceremony. The funeral prayer will be held at the Aasahara Cemetry after Maghrib prayer.

The National Defense Acadamy in Pune, India, where he had been undergoing a three-year officer cadet training course, previously said that Indian authorities will conduct a postmortem examination to determine the exact cause of death.

However, MNDF has confirmed that a postmortem was not conduct.

While MNDF did not disclose a reason for the decision not to conduct a postmortem, Sun has been informed the decision was made due to lack of consent from his family.

MNDF has lowered flags at all its centers for 48 hours in the wake of his death.

According to MNDF, Sultan died completing an endurance run at Camp Greenhorn on Saturday afternoon.

He collapsed during the run and was taken to the hospital on emergency at approximately 01:58 pm.

He was already deceased when taken to the hospital.

He was taking part in the 145th Officer Cadet Training Course at the Pune National Defense Academy. The course began on March 1 this year, and was scheduled to conclude on March 15, 2024.

Prior to traveling to India to undergo training, Sultan was serving at the Integrated Headquarters (J-1). He was promoted to the rank of Lance Corporal while undergoing training in India.