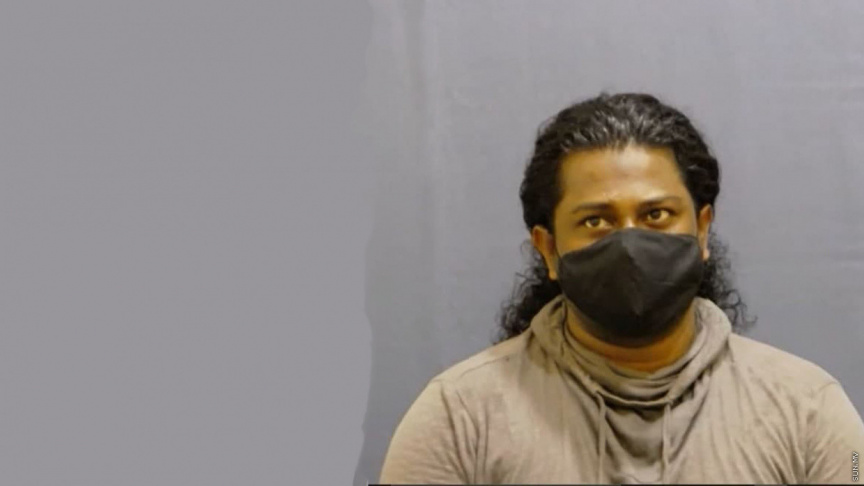 A Maldivian has been found guilty of the murder of a Bangladesh national at L. Gan six years ago.

The suspect found guilty of the murder is Ali Hamza, Red Fish, L. Gan. He had been charged with committing murder using a weapon.

The case against him stated that on the night of June 9, 2015, Hamza had attacked a Bangladeshi man – Baandh Shah Miya – at around 22:00pm.

It was further detailed that Hamza had struck Shah Miya on the face with a three-foot-long wooden stick – while Shah Miya had been asleep on the patio of Randhaanuge, L. Gan. Consequent to the blow to the head, Shah Miya had passed away.

During the investigation stage of the case – Hamza had admitted to the murder of Shah Miya, and also detailed how he had carried out the murder. However, he had denied the charges against him at the court.

Subsequently, the police officers who had been part of the investigations had testified against Hamza during court proceedings.

The police officer also testified that when Hamza was brought before the court for his remand hearing after his arrest – Hamza had explained in detail how he had carried out the murder, noting that he had also done the same when he was interrogated by the police.

Explaining that Hamza was not coerced or forced into saying anything, the police officer stressed that they had conducted the interrogation after reading his rights to Hamza.

Speaking further, the officer said that Hamza had confessed to getting high on Dunlop prior to committing the murder. Hamza then detailed to the police that he climbed up the wall of the house Shah Miya was sleeping at, and jumped inside, all the while carrying the can of Dunlop he was using to get high.

When he was inside the house – the police officer said that Hamza confirmed seeing Shah Miya asleep. He then said that he put away the Dunlop can, and hit the sleeping man in the face three with a wooden stick, after which he jumped over the wall to feel the scene. Hamza had further told the police that amidst fleeing he had gotten rid of the wooden stick by throwing it inside an abandoned house.

Judge Ali Adam who was presiding over the case that said based on the evidence presented before the court – it can be concluded that although Hamza’s action does not meet all the requirements of an intentional murder under the Islamic Sharia principles, it can be proven that his actions had directly resulted in the death of the person. In this regard, the Judge noted in Hamza’s confession he had stated that when he struck Shah Miya, he had intended to “hit” him. In light of this, Judge Ali Adam said it can be concluded that Hamza had committed an unintentional homicide.

Speaking further, Judge Ali Adam noted that a statement had been taken from Shah Miya’s aggrieved family members through the High Commission of Bangladesh – following which a letter had been sent to the court by the High Commission, stating their wishes. However, the State Attorney had raised questions over the contents of the letter.

“The letter read that the victim’s family wished that instead of imposing the death penalty on the defendant – they are given an adequate financial compensation for his death,” the State Attorney had said.

The State Attorney then said that the wordings of the letter do not make it clear as to whether “victim’s family” refers to Shah Miya’s aggrieved family members or just family members in general. Henceforth, the State put forward a request asking for more time to obtain a clearer statement from the aggrieved family members. Judge Ali Adam had granted 20-days for the task – citing that the court wished to not prolong the case further, as Hamza has already spent a long time in custody in connection to the case.

Remand of Lamha extended by 10 days

Husband and mistress charged in murder of IGMH nurse