Mariya: Work done by Customs is integral to national security 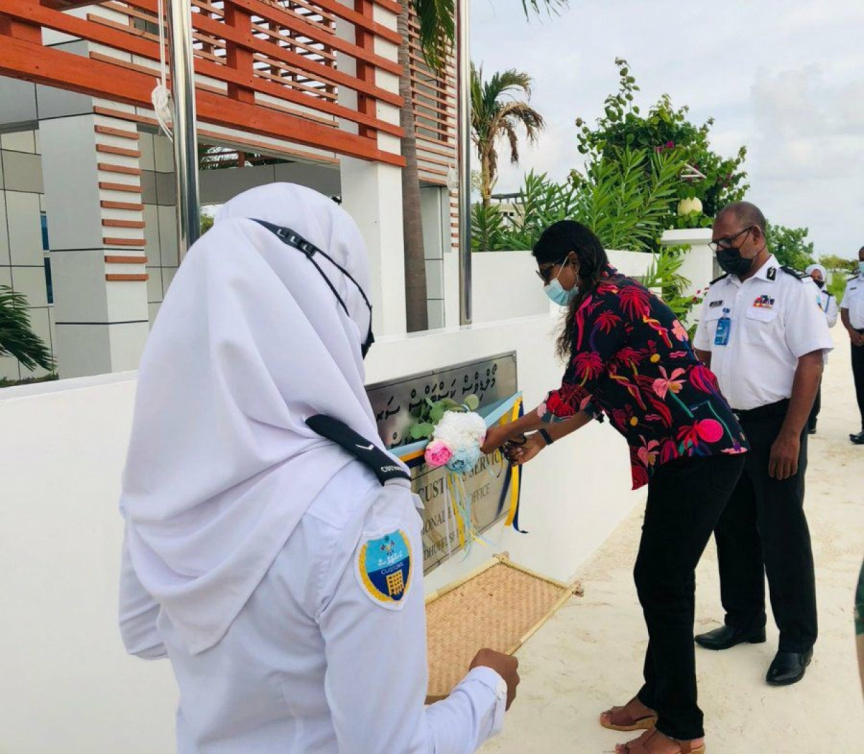 Defense Minister Mariya Ahmed Didi has described the work done by Maldives Customs Service as ‘laborious’ – adding that the work is closely tied to national security.

Minister Mariya said this whilst addressing the audience after officially inaugurating Customs’ North Regional Head Office at Kulhudhuffushi City – during a special ceremony held for the purpose.

In this regard, Minster Mariya noted that the number of drugs being detected and seized by the Customs has increased significantly recently.

Noting the talent and the competence of Customs Officers in combating drug trafficking to the Maldives – Minister Mariya thanked them for their tireless efforts in providing this national service.

“The work done by Customs is closely tied to our national security. The work is important and laborious. I thank Customs Officers from the bottom of my heart for the important services they tirelessly render to the nation,” she had said.

Speaking further, Minister Mariya said that Customs’ North Regional Head Office established at Kulhudhuffushi City as part of the government’s decentralization policy – will reduce the amount of time spend for cargo clearance in the northern harbors as well as cut costs for business and subsequently, lower the prices of things sold by them.

Customs’ Commissioner General Abdulla Shareef also spoke at the ceremony. In this regard, he had stated that that the establishment of the North Regional Head Office will pave way towards the development of the economic sector in the northern region.

He also noted that the establishment of a Customs’ office in the northern region during a time at which customers seeking their services from the region has increased due to the latest amendment to the Export-Import Act which exempts 50 percent of the duty charged from goods imported through regional harbors – will improve the organization’s regional services immensely. Shareef also added that the newly established office will ease difficulties faced by businesses operating in the region in terms of acquiring goods – as well as decrease the traffic to the Male’ Commercial Harbor.

Kulhudhuffushi City Mayor Mohamed Athif also spoke at the ceremony – during which he highlighted that Kulhuduffushi is an island on which a multitude of services are available for the residents and businesses from the island as well as the region, adding that the newly established Customs’ office will enhance the existing services.

The construction of Customs’ North Regional Head Office at Kulhudhuffushi City was contracted to SJ Constructions in 2017. This was a project valued at MVR 16.9 million – which was funded from the state budget.

The three-floor building comprises of an office area, a regional training centre as well as an accommodation block.