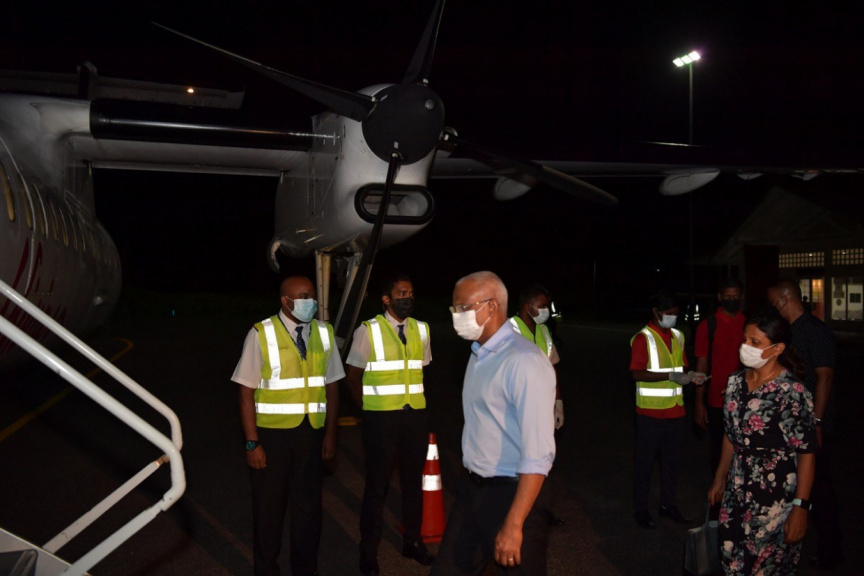 The following islands from each atoll were visited by them during this trip.

During the trip, President Solih conducted meetings with Shaviyani Atoll and Raa Atoll Councils as well as individual meetings with all the island councils and the Women’s Development Committees of the nine islands he had visited.

In the meetings held with Shaviyani Atoll and Raa Atoll Councils, President Solih was briefed on the development plans formulated for the atolls – as well as the ongoing development project. He was also briefed on the difficulties faced by atoll residents as well their most pressing needs and concerns.

President Solih also met with several key stakeholders from the islands such as the fishing and farming communities as well as police and healthcare providers.

During his visit to Alifushi – President Solih officially launched the Job Centre facilitated by the Ministry of Economic Development. At Maduvvari – he inaugurated the Madduvari School’s new multi-purpose hall.

President Solih and the First Lady also toured important landmarks, sites of historical significance and inspected the progress of ongoing development projects and government-initiated programs on the island. They also visited important establishments situated on the island such as health centres and schools.

The First Lady also visited the Family and Children’s Services Centre (FCSC) by the Ministry of Gender, Family and Social Services located at Funadhoo. She is also paid visits to several schools – where she met with students and held discussions with the educators and administrators of the schools. Books on preventing bullying and creating awareness against sexual violence were donated by the First Lady to these schools’ libraries.

President and First Lady were accompanied by cabinet ministers, senior executives from the President’s Office, and a delegation of high-level government officials on the trip.