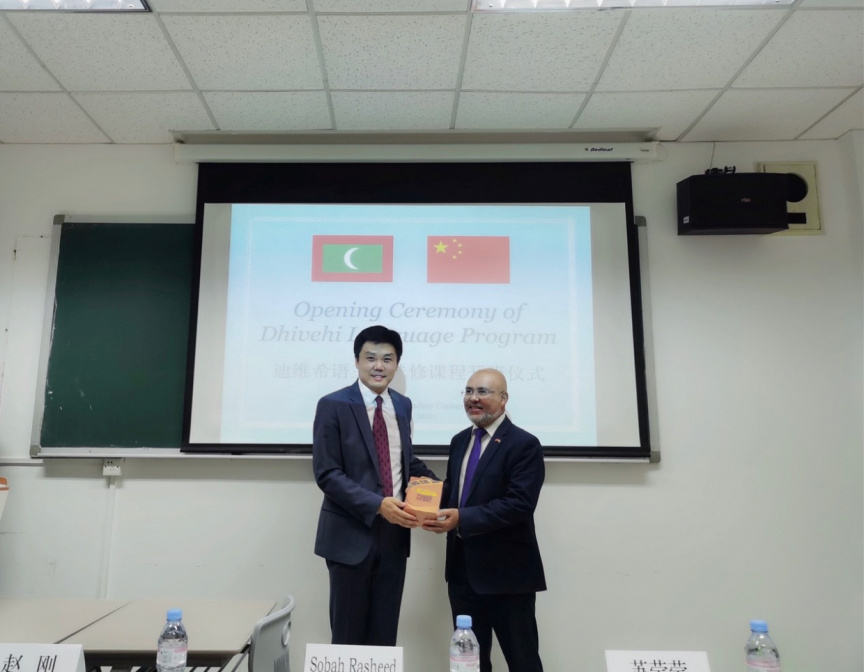 A capture from the ceremony held to launch a Dhivehi language course at Beijing Foreign Studies University on September 7, 2021.

A Dhivehi language course has commenced at a Chinese university for the first time ever.

A special ceremony was held yesterday at BFSU – to commemorate the commencement of the course which was special guested by the Deputy Ambassador of the Maldives to China Sobah Rasheed. The University’s Vice President Professor Zhao Gang also took part in the ceremony.

The classes in this course will be conducted by a Chinese teacher of the School of Asian Studies of BFSU – Zhu Fangfang – who was the host of the ceremony.

Speaking at the ceremony, Professor Zhao Gang said that the launch of this course is particularly meaningful for BFSU – and that the university attacked great importance to the development of Dhivehi language. He also noted that Dhivehi is the only official language of the Maldives and it carries a long history – along with a unique culture. Additionally, Zhao Gang stated that the course will help Chinese people to gain a deeper understanding of the history and culture of the Maldives and promote educational and cultural exchanges between the two countries.

Deputy Ambassador Sobah Rasheed also spoke at the ceremony – where he had stated this is the first time in history that a course dedicated to the Dhivehi language has been offered in an international university, noting that the unique language is only spoken in the Maldives itself. He also added that the launch of the course is a testament to the long-standing relationship between China and the Maldives.

China and the Maldives formally established diplomatic tied in the year 1972. As the first university in China to offer a Dhivehi language course, BFSU stated that they are training teachers and preparing for the construction of the program, making a positive contribution to the further deepening of friendly exchanges between the two countries.

Sinamale’ Bridge: The realization of a years-long dream