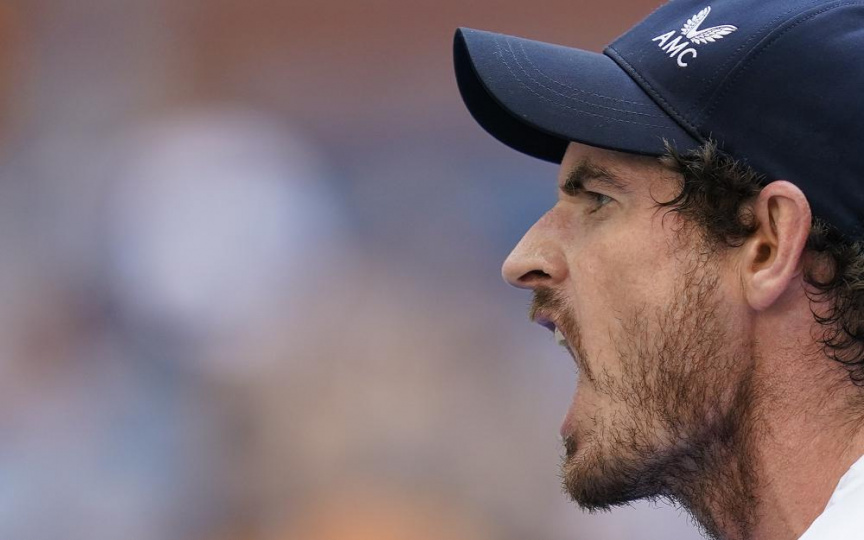 Andy Murray, of Great Britain, reacts after scoring a point against Stefanos Tsitsipas, of Greece, during the first round of the US Open tennis championships, Monday, Aug. 30, 2021, in New York. (AP Photo/Seth Wenig)

NEW YORK (AP) — Andy Murray is aware that Stefanos Tsitsipas has a growing reputation for pushing the boundaries when it comes to taking breaks during a match. Murray expected that to be an issue during their first-round match at the U.S. Open — and, when it was, that didn’t sit well. Not at all.

Murray figures there was enough for him to deal with in Monday’s high heat and humidity: He’s 34. He’s got an artificial hip. He’s ranked 112th after a series of health issues. At one point, he tumbled to the ground, losing his balance in sweat-soaked shoes and leaving splotches on the blue court from his soggy clothing.

So as the contest stretched to almost five hours, Murray did not appreciate that Tsitsipas took a medical timeout after the third set and made a lengthy visit to the locker room after the fourth. Following an entertaining, back-and-forth 2-6, 7-6 (7), 3-6, 6-3, 6-4 loss to Tsitsipas, Murray complained about what he considered unfair gamesmanship by the French Open runner-up and announced: “I lost respect for him.”

“It’s nonsense. And he knows it, as well,” said Murray, who is nearly a decade — and a pair of hip operations — removed from a U.S. Open championship.

Told of Murray’s displeasure, the just-turned-23 Tsitsipas said: “If there’s something that he has to tell me, we should speak, the two of us, to kind of understand what went wrong. I don’t think I broke any rules.”

The whole thing lent some intrigue to the proceedings as the year’s last Grand Slam tournament got underway with fans in the stands at full capacity — the combined attendance for the day and night sessions was 53,783 — a year after all spectators were banned because of the coronavirus pandemic.

“When we didn’t have a crowd,” reigning champion Naomi Osaka said after beating Marie Bouzkova 6-4, 6-1 at night, “I know it felt quite lonely for me.”

That was Osaka’s first Grand Slam match since she pulled out of the French Open in late May for a mental health break. She played rather well, compiling a 34-10 edge in total winners and saving all eight break points Bouzkova earned.

With exits for Murray and 2014 champion Marin Cilic, who stopped playing because of an injury in the fifth set against Philipp Kohlschreiber, the only man left in the draw after Day One with even one Grand Slam title is No. 1 Novak Djokovic.

He will debut Tuesday night as he tries to break a tie for the men’s mark of 20 majors with Roger Federer and Rafael Nadal and become the first man since Rod Laver in 1969 to complete a calendar-year Grand Slam.

“I just remember, like, last year, not necessarily being bored, but it was just so quiet for the U.S. Open,” the 21st-seeded Gauff said after advancing to face Stephens with a 5-7, 6-3, 6-4 comeback against Magda Linette. ”I definitely missed the buzz.”

Some spectators griped about delays getting in, which the U.S. Tennis Association said were largely caused by the time it took to inspect bags at the entry gates.

The USTA added that checking for proof of vaccination required to attend the event this year went smoothly and did not contribute in a significant way to long lines.

Those lucky enough to be in Ashe rose and roared in unison when Murray smacked a forehand winner to claim the third set. He raised his right hand overhead and leaned forward as he shouted, “I’m not ... done! Let’s go!”

But it was Tsitsipas who wasn’t finished. He got treatment from a trainer on his left foot after that set, then headed off court again a set later for several minutes.

After he got broken right away and fell behind 2-0 in the fifth, Murray offered this observation on court: “It’s never taken me that long to go to the toilet. Ever.”

Murray explained later he thought the interruptions played a role.

“It’s just disappointing, because I feel it influenced the outcome of the match. I’m not saying I necessarily win that match, for sure, but it had influence on what was happening after those breaks,” he said. “You could argue that I shouldn’t let that affect me. But genuinely it is difficult, like, when you’re playing such a brutal match in those conditions to have those breaks. Physically you can’t stop that from affecting you. Mentally, yes, but physically you can’t.”

The humidity at 70% and the temperature in the low-80s Fahrenheit (high 20s Celsius) required a bit more than Murray could give. He is a former No. 1 who won Wimbledon twice in addition to his 2012 title in New York, but his body has not held up.

Given his age and health history, it was remarkable that Murray was out there at all, let alone coming close to becoming, at No. 112 this week, the lowest-ranked man to upset an opponent in the top three at the U.S. Open since the computerized ATP rankings began in 1973.

After a third-round exit at Wimbledon early last month, Murray sounded rather glum about his future, frustrated that that he couldn’t practice as much as he’d like to be properly competitive. On Saturday, Murray opined that taking on Tsitsipas would be “a good, good test for me to see kind of where my game’s at.”

He seemed to pass that test. He much rather would have won.