‘Back where I belong’: Ronaldo completes return to Man U 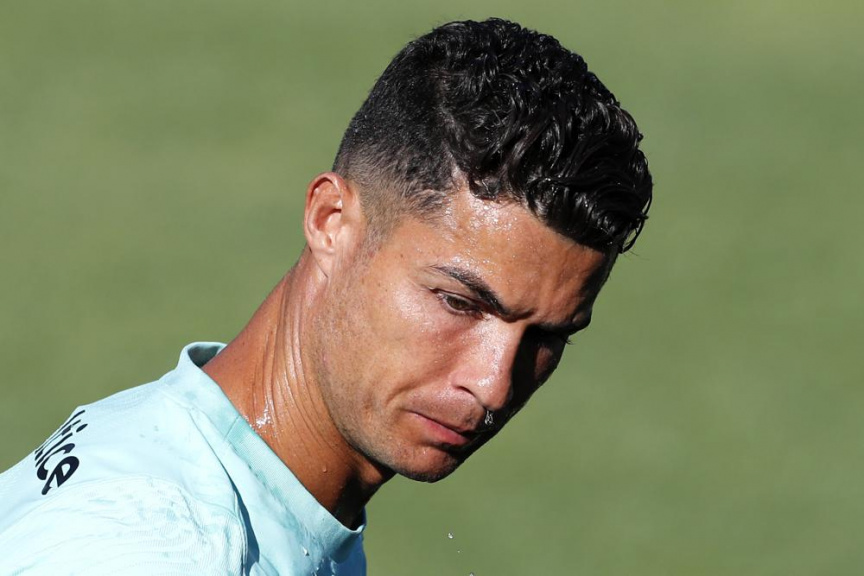 Portugal's Cristiano Ronaldo looks on after wetting his face with water, during a training session in Oeiras, Portugal, Monday, Aug. 30, 2021. (AP Photo/Armando Franca)

Cristiano Ronaldo is looking to the future at Manchester United after a nod to the most influential figure of his soccer past.

Finalizing one of the summer’s most high-profile deals on the last day of the European transfer window, the five-time world player of the year completed his sensational return to United after 12 years away and said: “I’m back where I belong.”

“History has been written in the past,” the 36-year-old Ronaldo wrote on Instagram on Tuesday, “and history will be written once again! You have my word!”

Ronaldo signed off his post by dedicating his return to Old Trafford to the man who first brought him to United in 2003 — when he was a skinny, supremely gifted 18-year-old winger — and turned him into a superstar.

Alex Ferguson, the most successful manager in United’s history, is thought to be among the club greats who helped to persuade Ronaldo to move back to United amid interest from crosstown rival Manchester City, which had been offered the Portugal forward by his agent. Ronaldo has previously called Ferguson “my father in sport.”

An agreement was reached with Juventus over Ronaldo’s transfer on Friday, and one of soccer’s most stunning deals in years was completed after a medical examination.

A fee of 15 million euros ($17.75 million) will be paid to Juventus over five years. That could be increased by 8 million euros ($9.5 million) depending on “specific performance objectives” achieved by Ronaldo, who has signed the two-year contract with the option to extend for a further year.

“I can’t even start to explain my feelings right now, as I see my return to Old Trafford announced worldwide,” Ronaldo wrote. “It’s like a dream come true, after all the times that I went back to play against Man. United, and even as an opponent, to have always felt such love and respect from the supporters in the stands.

“This is absolutely 100% the stuff that dreams are made of!”

A title winner with Real Madrid and Juventus, Ronaldo won the English Premier League three times with United but the club hasn’t won the title since 2013.

Ronaldo’s debut could come against Newcastle on Sept. 11, the day the Premier League resumes after the international break.

With a striker not a priority until Ronaldo became available, United found itself with a squad overloaded with attacking players. That prompted the club to let right winger Daniel James leave, with the Wales international joining fellow Premier League team Leeds for a reported fee of 25 million pounds ($34.4 million) on Tuesday.

James came close to joining Leeds in 2019 before United made a late move to sign him. He played 74 games in all competitions for Ole Gunnar Solskjaer’s team, scoring nine goals.

A number of other teams were looking to reshape their squads on transfer deadline day, too.

Tottenham completed the transfer of Emerson Royal from Barcelona, which only signed the Brazilian right back back from Real Betis at the start of June.

West Ham signed Croatia attacking midfielder Nikola Vlasic on a five-year deal from CSKA Moscow to give the London club more options up front for a season when it will play in the Europa League. It comes two days after West Ham signed center back Kurt Zouma from Chelsea.

Leicester signed winger Ademola Lookman on loan from German club Leipzig — he spent last season on loan at Fulham, which ended up getting relegated from the Premier League — and sent Belgium midfielder Dennis Praet on loan to Italian team Torino.

The priority for Arsenal, which is in last place in the league after losing its first three games, might be getting some players off its wage bill on Tuesday after an offseason of heavy spending. Willian reached an agreement with the club on Monday to end his contract two years early so he could join Corinthians in Brazil, while Reiss Nelson was sent on loan to Dutch club Feyenoord. Others could leave before the transfer window shuts.

Also, Liverpool captain Jordan Henderson signed a contract extension through 2025. The 31-year-old midfielder has 394 appearances since joining from Sunderland in 2011, scoring 30 goals and winning the Premier League, Champions League and Club World Cup.