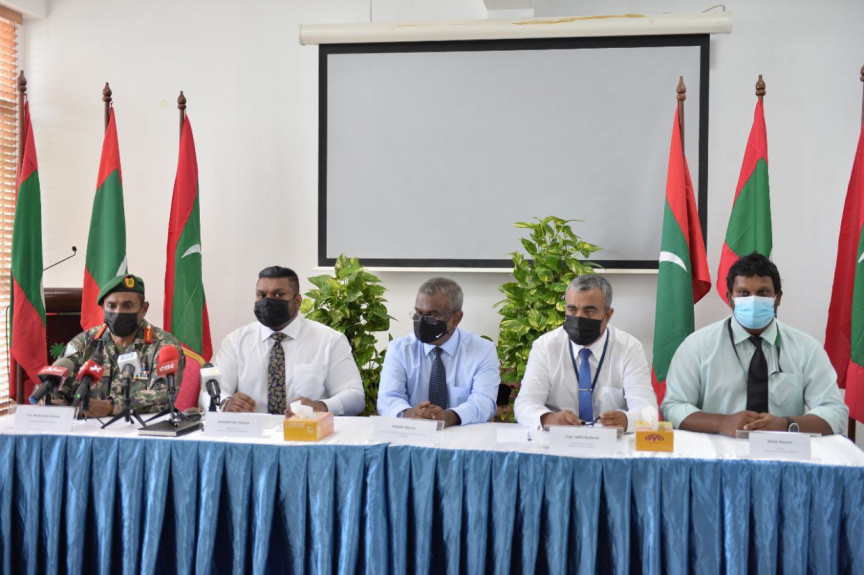 A capture from the press conference held today regarding Panama-flagged cargo ship that ran aground on the reef west of K. Rasfari. (Sun Photo/Fayaz Moosa)

Transport Ministry has stated the captain of the Panama-flagged cargo ship that ran aground on the reef west of K. Rasfari in the early hours of last Thursday morning, Navios Amaryllis, has been negligent in the incident.

Speaking at a press conference held today, Deputy Minister at Transport Ministry Hamad Abdul Ghanee stated that the ship has gone aground consequent to being cast adrift in the open water after one of its engines was shut off. He also alleged negligence by the ship’s captain – played a part.

“From the information we have gathered so far regarding the incident, we can conclude that the ship’s third engine unit having been shut down due to high-temperature levels had caused it to be cast adrift in the open water and subsequently running aground,”

“This our preliminary findings. We also note that the ship’s captain had failed to take all necessary actions in order to save the ship from the reef,” he had said.

Additionally, Hamad highlighted the captain’s failure to report the engine problem to the coastal state – which a duty of the captain to have done do.

“Prior to the ship running aground, we noticed that the engine problem they were facing was not reported to the coastal state. Moreover, actions which should have been taken in the capacity of a captain such as anchoring the ship or requesting for help were not done,” he had said.

Navios Amaryllis was traveling from India’s Tuticorin port to South Africa’s southern port through an innocent passage without any cargo on, at the time it ran aground.

'No Israeli airline authorized to travel to Maldives'