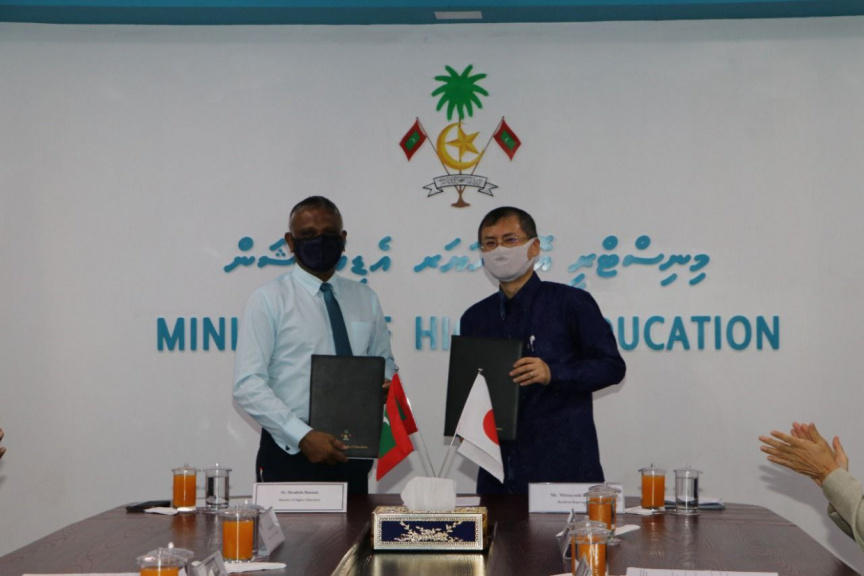 A capture from the signing ceremony of agreement pertaining to grant aid provided by Government of Japan to Maldives for Human Resource Development held on August 26, 2021. (Photo/Ministry of Higher Education)

The Government of Japan has donated approximately USD 998,000 (110 million Japanese Yen) to the Maldives for further promoting Human Resource Development in the Maldives.

The grant aid will be utilized to continue scholarships opportunities to be offered by the Government of Japan for the year 2022 as part of the Japanese Project for Human Resource Development (JDS). It will cover a total of six scholarships.

The Exchange of Notes pertaining to the grant was signed back on July 15, by the Ambassador of Japan to the Maldives Keiko Yanai and Foreign Minister Abdulla Shahid. The Exchange of Notes is the first agreement Japan signs with a country for which they are providing financial aid for. Following this, the drafting up of the official agreement will commence.

Accordingly, the official agreement pertaining grant was signed today during a ceremony held at the Ministry of Higher Education. Minister of Higher of Education Ibrahim Hassan signed on behalf of Maldives. Representative of Japan International Cooperation Agency (JICA) Mitsuyoshi Kawasaki signed on behalf of Japan.

This counts as the second year in which Japan has provided the Maldives with grant assistance pertaining to human resource development. The initial agreement was signed back in 2020 – and implemented last year.

Ministry of Higher Education noted that 12 Maldivian students would be provided the same opportunity in the upcoming two years.

Students who win the scholarship will be able to study up to a masters’ degree and receive training in areas such as environment, climate change, economics, political science, and administration.