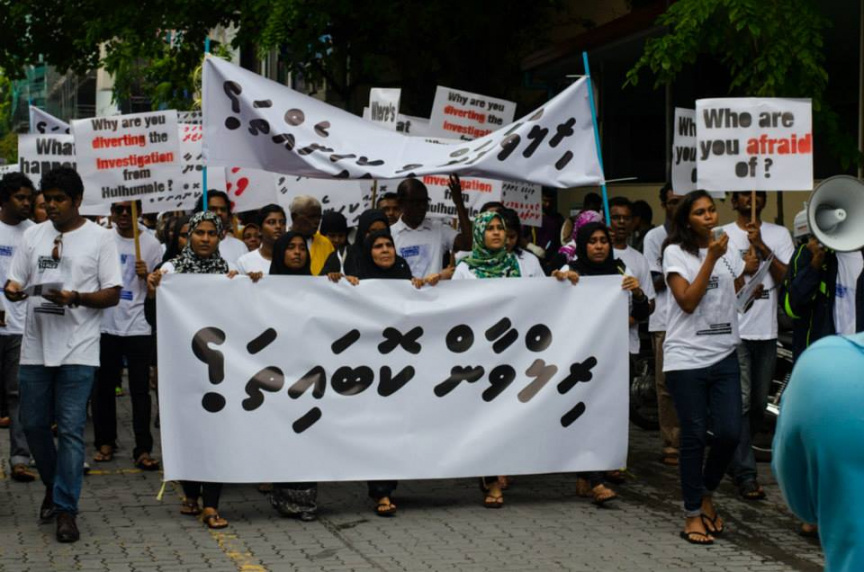 A march held in Male' city calling for the case of Rilwan to be investigated.

Commission on Disappearances and Deaths (DDCom) has stated today that they were working on formulating a witness protection program for witnesses who testify in criminal cases.

In a statement released by DDCom, they stressed that they were working very hard to ensure justice is served in the case of Ahmed Rilwan Abdulla, a journalist who was working for Minivan News (later renamed Maldives Independent) that had disappeared without a trace in 2014. They also added that they were collaborating with the Police and foreign experts to further enhance the quality of their work.

In line with this, DDCom noted that they were working on formulating a witness protection program – citing that many individuals who have information regarding the disappearance and death of Rilwan have been hesitant to come forward with what they know.

“DDCom is working to formulate a witness protection program in collaboration with the relevant government authorities and with the assistance of foreign experts,” the statement had read.

DDCom further detailed that the witness protection program will be formulated in a way it best suits the Maldives after analyzing the social, religious, political and population status.

The bill details that in a circumstance where a danger posed to a witness is taken note by him or her, the witness must inform the Prosecutor General’s Office in order to ensure his or her safety.

In a case where it is taken note of by the Court, the Court was to be vested the power to order the Police and other relevant government authorities to ensure the protection of the witness – with details as to how.

Today marks the 7th year since the disappearance of Rilwan.

Green Card to be issued to fully vaccinated parents