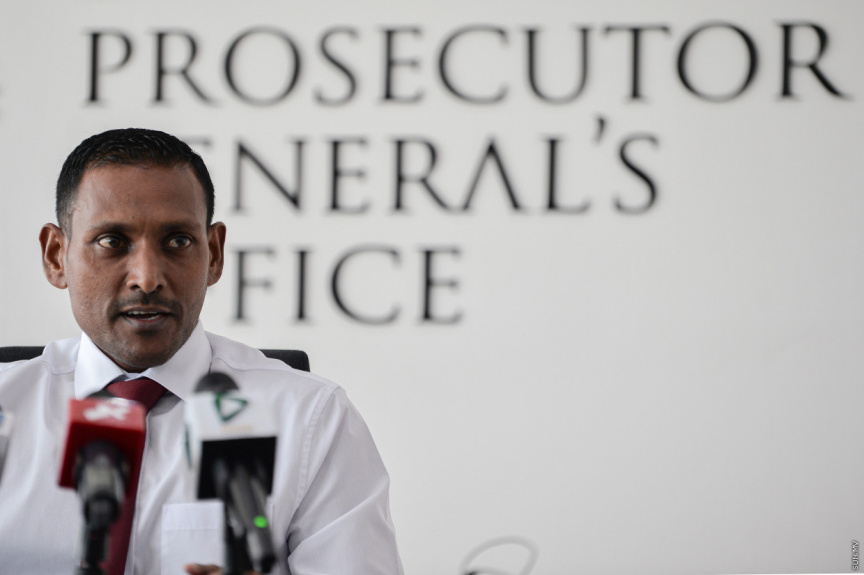 Prosecutor General Hussain Shameem has denied the allegations made against him speculating that he was the one who had leaked the statement made by former President Abdulla Yameen Abdul Gayyoom in the money laundering case against him over the sale of R. Fuhgiri for resort development.

The statement made by the Yameen in the money laundering case against him over the sale of Fuhgiri was leaked yesterday – following which some media outlets had alleged that it had been leaked by Shameem.

Speaking to Sun last night, Shameem noted that the statement in question was recently released by the court to the lawyers of Yameen – thus they have the opportunity to leak the statement just as well.

He added that the statement has been in possession of the PG Office and Police for over a year – yet it had not been leaked up until now.

He also guaranteed that the PG Office is not the source of the leaked statement – pointing that it is a norm at the office to handle statements containing sensitive information every day and that this kind of work was not something they were new to.

“I have just returned to work after being on leave. It has been a while since I had met any media personnel. If we wanted to leak something – there are much more statements than this to leak. Statements that contain more sensitive information are handled by us every day. So that statement is basically nothing in comparison,” Shameem had said.

He also alleged that the source of the leak is amongst Yameen’s legal team – having been the last ones to receive a copy of the statement.

Shameen also added that it was unacceptable to accuse PG Office of such a wrongful act without a properly looking into the matter while such false accusations would impact the amount of trust placed in the institution by the people.

OPPOSITION ALLEGES THAT THE STATEMENT WAS LEAKED TO OBSTRUCT JUSTICE

While Shameem points fingers at Yameen’s legal team as the source of the leak – the Opposition Coalition comprising of Progressive Party of Maldives (PPM) and People’s National Congress (PNC) also released a joint statement regarding the matter last night, condemning the leak.

In the statement, the Opposition alleged that the Government was behind the source of the leak and it had been done so in order to obstruct the course of justice.

The statement read that they believe that publicizing a statement given by a citizen during an investigation of an ongoing trial – on a newspaper can be considered as obstruction of justice.

“The publication of a statement given by a citizen during an investigation of an ongoing trial can be considered as an act of obstruction of justice. This Coalition is in the view that the publication of such a statement without confirming its validity – should be a punishable crime,” they had said.

They further detailed that an innocent person has been defamed due to the contents of a statement that had not been verified as real or not in the first place.

The Opposition Coalition also alleged that the statement was leaked by the Government in collaboration with the Police and PG Office – thus they have called on the matter to be investigated by an independent institution and subsequently take action.

'DDCom does not have any evidence against Yameen'