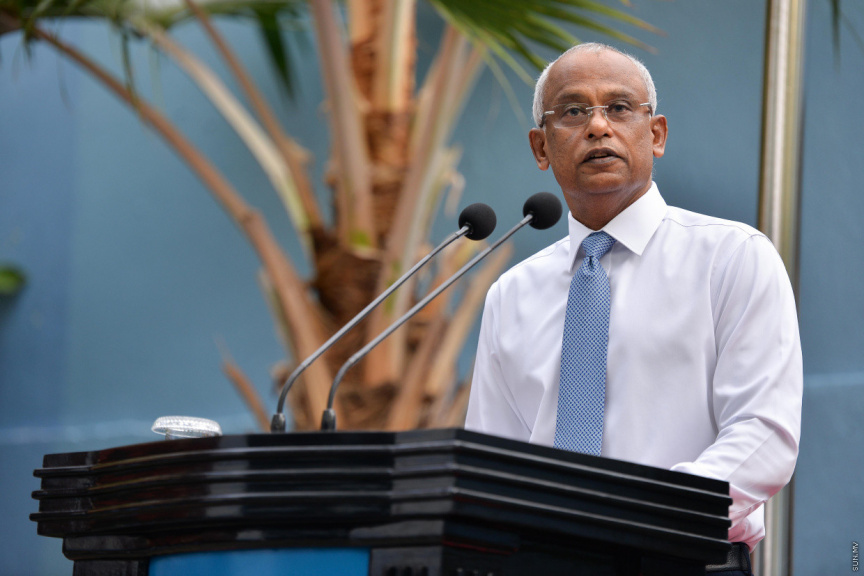 President Ibrahim Mohamed Solih urged the Maldivian people on Monday to rise against hateful conduct against Islam and extremist ideologies that propagandize bloodshed in the name of Islam, describing them as grave societal issues that threaten Maldives’ independence, and must not be allowed within the Maldivian community.

He made the appeal in his address on occasion of the 56th anniversary of Maldives’ independence on Monday morning.

In his address, President Solih said that firm belief in Islam is the foundation of Maldives’ national and social solidarity.

He said that the extremist ideologies and actions between propagated in the Maldivian community in the name of Islam have no relation to Islam, and are firmly refuted in its teachings.

"These ideologies categorically contradict the disciplinary standards and principles of Islam. Indeed, human logic and common sense compel countering the spread of these ideologies within the community,” he said.

He stressed that Islam is a religion that laid out the principles of independence, peace and unity, and does not sanction bloodshed.

“There are some among us who erroneously believe in and propagandize bloodshed in the name of Islam – a religion that in truth laid out the principles of independence, peace and unity. Every one of us who wish to safeguard the independence and sovereignty of the Maldives must readily rise against this dangerous movement,” he said.

President Solih said that the war and unrest being experienced in a number of Islamic countries today stems from extremist ideologies.

"It was reciprocal murder and destruction of private property that signified the origin of the state of conflict we see today in these countries, followed by the influence of external forces. Today, there is no independence, peace or harmony in those countries,” he said.

President Solih said that religious slurs and hateful conduct against Islam pose as great a threat.

“At the same time, religious slurs and hateful conduct against Islam are harmful acts conducive to societal discord and unrest. Therefore, to ensure our national independence we must all be mindful of actions that spur hate between us and are blasphemous to Islam. Neither of these grave societal issues must be allowed in our community,” he said.

President Solih said that legal action alone isn’t enough to solve the two issues, and that a lasting solution to the issues lies in instilling Islamic faith in Maldivian children.

“These two issues will keep recurring if we fail to raise our children through the teachings of Islam," he said.

He said the government is therefore exploring options within the education system to resolve the issues.

President Solih, in his address conveyed Independence Day greetings to the Maldivian people, and described the commemoration of martyrs who sacrificed their lives to safeguard Maldives’ independence and sovereignty as a national duty of every Maldivian.

'Maldives has lost its right to self-determination'