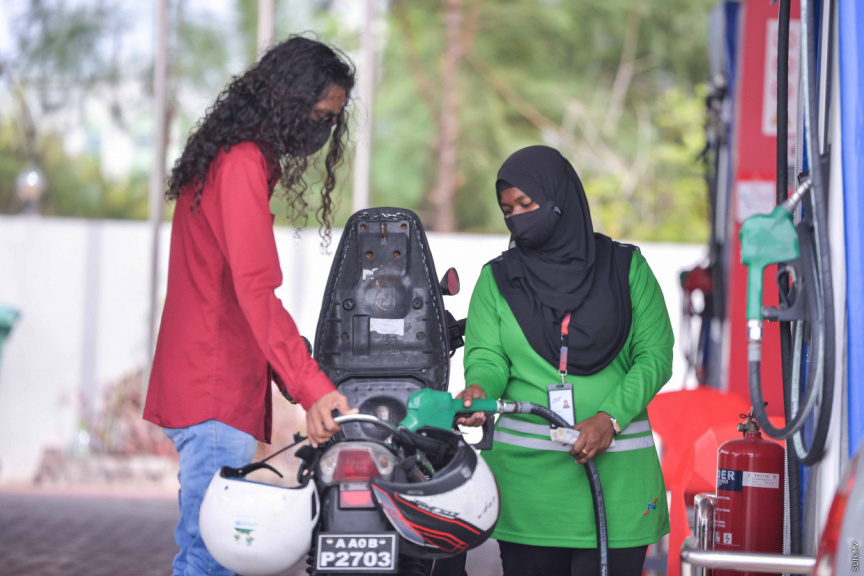 A customer refuels his motorbike at a petrol shed on February 24, 2021. (File Photo/Sun/Fayaz Moosa)

Fuel Supplies Maldives (FSM) has announced their plans to establish a self-service petrol shed in the Male’ Area within this year.

Speaking at a television program broadcasted by Raajje TV last night, FSM’s Managing Director Mohamed Gasam stated that the company is presently working on upgrading its petrol sheds located in the Male’ Area – adding that the design of some of the sheds that will be transformed under this project to cater its services through advanced technology – are being finalized.

Gasim further detailed that the capacity of the temporary petrol shed at Male’ Industrial area will be increased – and the plans and drawings pertaining to it has been finalized. Upon upgradation, the shed will be able to attend to 14 motorcycles and eight four-wheeled vehicles simultaneously.

Additionally, prior to this shed being upgraded – one of the remaining sheds in the Male’ area will begin self-serving as well.

“The first thing we are trying to accomplish is establishing a self-service petrol shed – one where customers can fill their gas tanks and even make payments on their own without the assistance of a staff. We are working to achieve this soon,” Gasim had said.

However, Gasim also noted that the company had decided to conduct a research onto thoughts of the general public on the matter, and assess the advantages and disadvantages to the company prior to the introduction of a self-service petrol shed but that this is being delayed due to the difficulties posed by the pandemic.

He further detailed the company will conduct a trial-run as part of this research at the petrol shed located at Hulhumale’.

“The pandemic is slowing us down. Our Board has instructed us to conduct a trial run at the Hulhumale’ petrol shed in order to identify the thoughts of the general public on the matter – their support and awareness regarding self-service in addition to identifying the advantages and disadvantages to the company,” Gasim stated.

“Our hope is that we begin self-serving at an existing petrol shed in Male’ area before we establish the new one,” Gasim also added.

'Can move Vilimale' barges once a new location granted'

Price of petrol rises to MVR 16.55 per liter

Few companies in Maldives can operate like FSM: Amru