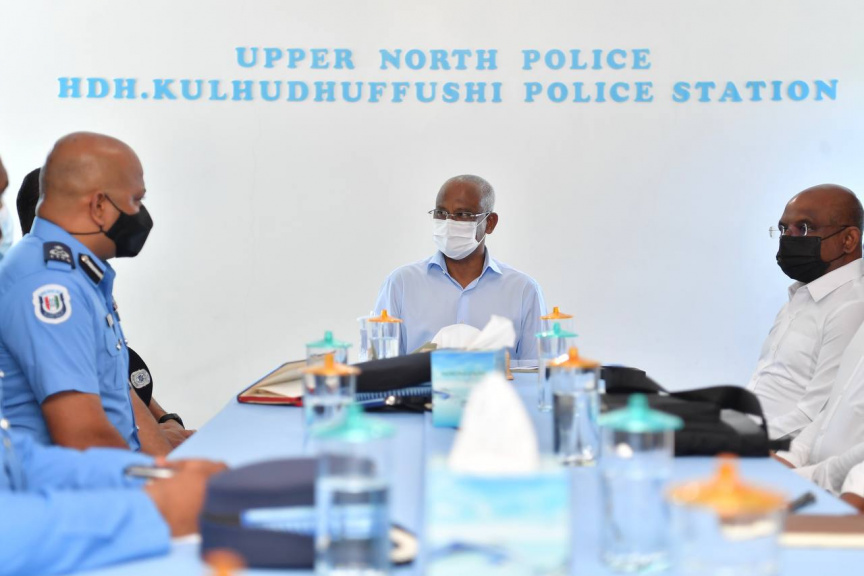 President Ibrahim Mohamed Solih states that various meaningful changes implemented over the past two years to improve policing have been successful in garnering public trust.

He made the statement in a meeting with senior officials from Maldives Police Service at the Upper North Police Station in Kulhudhuffushi City on Saturday morning.

In the meeting, President Solih spoke of the importance of law enforcement for sustaining communities, and noted that the most prominent role in law enforcement rests upon the police.

“Various meaningful changes implemented over the past two years to improve policing in the country have successfully garnered public trust,” he said.

President Solih said that the decentralization of policing under the new Maldives Police Service Act will ease difficulties in policing, and provided assurance the government will provide the resources needed for the changes to materialize.

He also said that the government plans to initiate the construction of 61 police stations in different islands within the upcoming year, which will include the establishment of an extension building for the Kulhudhuffushi regional police headquarters.

The senior police officials who attended the meeting noted difficulties faced in policing and shared concerns, including lack of resources and infrastructure needed to improve police capabilities and services.

They discussed ways to ensure arrangements for better communication between relevant authorities and agencies, and also shared information about the changes being implemented to policing under the Police Service Act and ongoing efforts to develop human resources and improve overall policing.

The first couple’s current visit to Kulhudhuffudhi City is the first leg of a three-island trip to the north of Maldives. From Kulhudhuffushi City, the President and First Lady will visit HDh. Kumundhoo and then HDh. Hanimaadhoo.