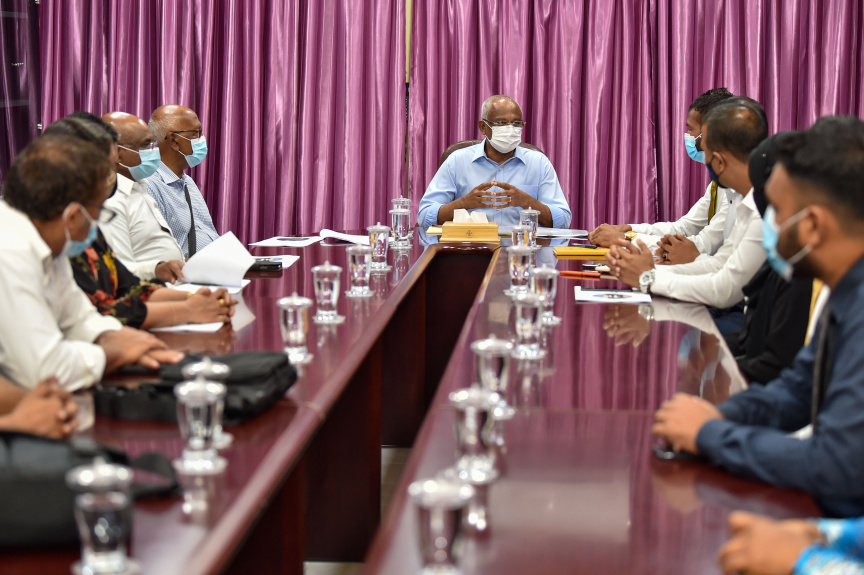 President Ibrahim Mohamed Solih has acknowledged the key role Kulhudhuffushi City plays in providing essential services to the entire region, and promised his administration will prioritize upgrading the services provided at the regional hospital in the northern city.

He made the promise in a meeting with management of Kulhudhuffushi Regional Hospital on Friday, as part of his ongoing tour of three islands of HDh. Atoll.

In the meeting, President Solih said that Kulhudhuffushi is a central hub that is vital to service delivery in the region.

He reiterated his administration’s vision to develop tertiary level hospitals in five regions of Maldives aimed at improving nationwide healthcare, and said that the realization of the vision would reduce public reliance on centralized healthcare services in the greater Male’ region and that positive changes are already being seen in this regard.

President Solih also shared the latest details of the efforts underway to develop Kulhudhuffushi Regional Hospital, and said that his administration will continue to expand services offered at hospital, before the establishment of the newly proposed tertiary level hospital in Kulhudhuffushi.

He said that huge advancements have been made by the hospital in actualizing the decentralized specialized healthcare envisioned by his administration for the progress of healthcare in the atolls and applauded the hospital for their impressive strides made towards achieving the goal.

The Kulhudhuffushi Regional Hospital expansion project involves the addition of a 30-bed ward with 6 ICU beds and a walkway. Another simultaneous expansion project involves the addition of 23 consultation rooms to the existing ER facility in the hospital. The hospital recently introduced MRI and CT scan services as well as speech therapy sessions, with the inclusion of the freshly restarted mammography service along with several other healthcare services.

Prior to the meeting, President Solih and First Lady Fazna Ahmed toured Kulhudhuffushi Regional Hospital and inquired about the services offered at the hospital.

The first couple’s current visit to Kulhudhuffudhi City is the first leg of a three-island trip to the north of Maldives. From Kulhudhuffushi City, the President and First Lady will visit HDh. Kumundhoo and then HDh. Hanimaadhoo.