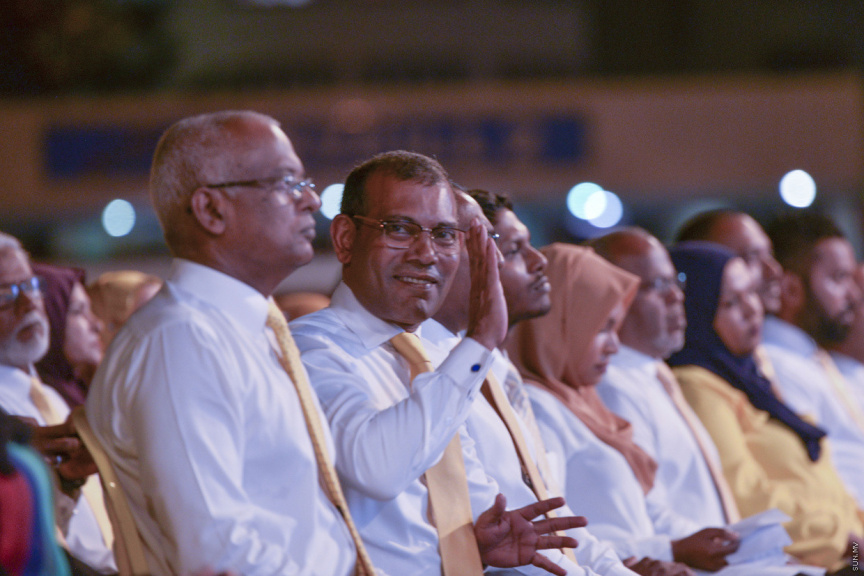 Parliament Speaker and leader of ruling MDP, former President Mohamed Nasheed states he finds it “very difficult” to support the government if it is unable to employ the leadership required to support the bill amend the Penal Code to stop hate speech.

In a statement on Saturday morning, Nasheed said the MDP requires not only requires diplomacy and compromise, but also courage and steadfastness on fundamental issues such as freedom, equality and economic progress.

After the most recent assassination attempt in the Maldives, this time directed at me, the government duly recognized the root of the issue as labelling people by radical Islamists as un-Islamic, which then leads to death sentences in the form of a fatwa. The hot-headed Jihadi indoctrinated groups then execute the fatwa, as was the case of all other extremism-motivated murders, including Dr. Afrasheem, Rilwan, and Yameen. As recent history clearly shows, people who are targeted by this labeling and hate crimes that follow are politicians, journalists, and every-day people who exercise freedom of speech. The government therefore rightly put forth a bill in our Parliament that criminalizes such labelling,” he said.

Nasheed expressed concern over the decision of the government to withdraw support from its own bill when faced with objections from conservative religious parties that are part of the political alliance with the government, including the Adhaalath Party (AP).

He suggested that the withdrawal of support for the bill also came after it was realized politicians who supported the bill would be exposed to the same deadly labelling the bill seeks to stop.

Nasheed accused President Ibrahim Mohamed Solih of allowing a minor coalition partner such as AP to monopolize his every decision.

He said that with the decision, it has become clear the current dynamics of the coalition violate every principle of democracy.

Nasheed said the vast majority of Maldivian people are progressive, and cherish liberty, freedom of expression, music, culture, and economic prosperity, and hold moderate religious views, and have always voted for progressive candidates who share these views.

“We must never – out of fear – simply hand over the reins of democratic leadership and the course of Maldivian progress to fringe factions, or to minor coalition partners that did not carry the vote. Democratic principles, and our Constitution, demand that our elected leaders maintain their contract with the people and defend the MDP’s most basic standards,” he said.

The hate speech bill was reviewed by the Judiciary Committee, which completed the work presented it to the Parliament floor for a vote earlier this July. However, the bill wasn’t called to vote, but was sent back to the committee.

Many MDP parliamentarians who spoke during the debate on the bill said that Thulhaadhoo MP Hisaan Hussain, who sponsored the bill, was receiving death threats, and expressed concern the government hasn’t spoken in her defense.