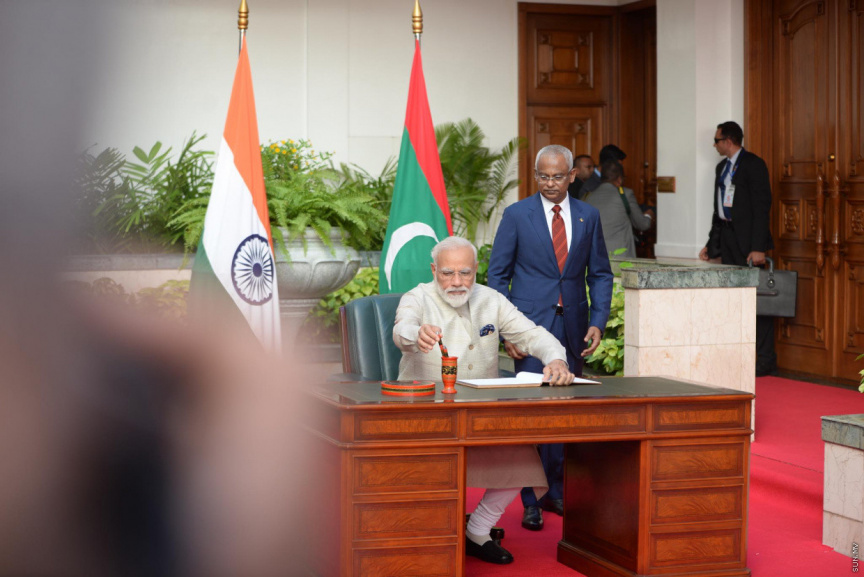 Indian Prime Minister Narendra Modi signing the honorary book of guests at the President's Office during a visit to the Maldives. President of the Maldives Ibrahim Mohamed Solih is seen standing behind the PM of India, (Sun Photo/Ahmed Awshan Ilyas)

The Indian government cabinet has approved to establish a Consulate General of India in Addu City, Maldives.

The opening of the consular service in Aduu was an important step under the Security and Growth for All in the region initiative and the Neighborhood First policy of India, stated the Indian government after the approval of the decision. Moreover the Indian government noted the linguistic similarities of Maldives and India as well as the cultural and religious ties between the two nations in addition to the economic ties.

The statement by the Indian government accompanying the decision also read that the opening of a Consulate General in Addu City will help augment India's diplomatic presence in the Maldives and make it commensurate with the existing and aspired level of engagement.

The momentum and energy in the bilateral relationship have reached unprecedented levels under the leadership of Prime Minister Modi and President Solih, read the statement

"This is also a forward-looking step in pursuit of our national priority of growth and development or 'SabkaSaathSabka Vikas'. Augmentation of India's diplomatic presence will, inter-alia, provide market access for Indian companies and bolster Indian exports of goods and services," read the statement.

The establishment of consular services would have a direct impact in augmenting domestic production and employment in line with our goal of a self-reliant India or 'Atmanirbhar Bharat', said the Indian government in its statement for the decision.

The Maldivian Foreign Ministry declined to comment on the decision stating that it was a decision of the Indian government.

The Foreign Ministry did, however, say that it will accept and review applications for the establishment of diplomatic missions as per the Vienna Convention and local laws.

Vehicles gifted by India handed over to Corrections