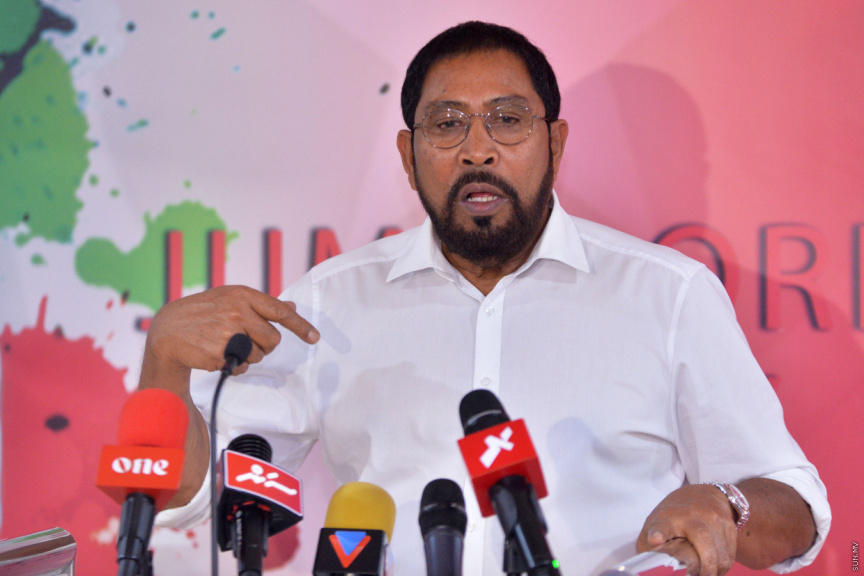 The leader of the Jumhoory Party (JP) and MP for Maamigili Qasim Ibrahim has spoken out against the MDP-backed motion of no confidence against Minister of Science, Communication and Technology, Maleeh Jamaal who is a JP member.

MP Qasim was quoted by a senior member of JP who spoke with Sun and stating that the MP had found the motion with no basis and that MP found it by no means acceptable.

The senior official said that the motion had no basis because it targeted Maleeh for failing to reduce internet prices during a time when the world was at a halt due to the COVID-19 pandemic. The official said that MP Qasim opposed the move.

“The Ministry is a ministry. MP Qasim said that the proper resources were not provided to the ministry. The MP says that it was not acceptable to remove Maleeh from his post for not being able to do something without any funds provided during a time when the world was at a stop due,” said the official.

The JP is a part of the governing coalition of parties, including MDP.  The senior official said that under the coalition agreement, parties were required to inform each other if a Minister serving a slot of the other party was not performing their duties.

“The party leader, not the party have received any complaint regarding Maleeh,” said the official.

MDP PG Group leader Ali Azim submitted the motion of no confidence against Maleeh with the signature of 14 MPS. MDP has issued a three-line whip for Maleeh’s removal. Heated exchanges and debates were held in the parliament today between the Minister and parliamentarians. The Minister was attending to respond to the allegations made in the motion against him.

Maleeh today said that the motion was fueled by statements he made on TV last year.

“The nation is bigger than my job. I am more than ready if I have to lose my job in order to get the rights granted by the Constitution,” said Minister Maleeh.

Committee to look into allegations by Tech. Minister