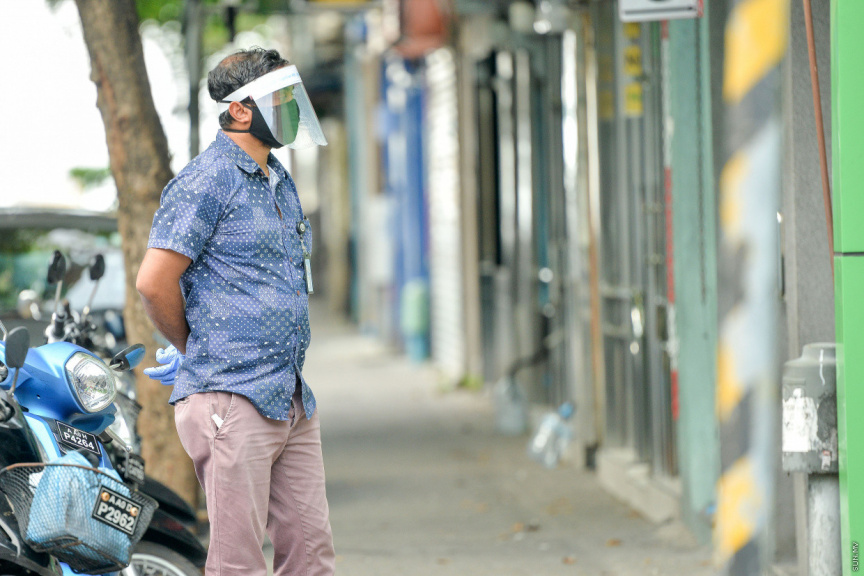 A man wears protective gear to protect from the spread of COVID-19 as he waits outside a shop in Male' City on May 12, 2020. (Sun Photo/Fayaz Moosa)

The Directors Board of the World Bank has passed to provide USD 21.6 million to expand the government-run Income Support Allowance scheme, which is provided for individuals whose income is negatively impacted due to the pandemic and its economic impact.

The government began the scheme in June 2020, with USD 12.8 million. The scheme is to be expanded to provide MVR 5,000 to individuals negatively impacted due to the virus.

Mr. Faris H. Hadad-Zervos, the World Bank Country Director for Maldives, Sri Lanka, and Nepal said that the impact on income due to the pandemic could have a lasting effect for most of 2021.

He stated that hotels and resorts were expecting a reduction in the number of tourist visitors in the winter high season due to the spread of the virus in the Maldives and all over the world. He added that a large number of workers were forced to stay at home on leave with no pay or on reduced pay with many having lost their employment.

The Country Director also stated that the expansion of the Income Support project in the Maldives would help employees gain a sufficient amount of income to meet their essential needs and requirements.

The World Bank stated that the government had played a massive role in saving the livelihoods of those in need, with the Income Support project.

Around 17,000 individuals were provided with income support totaling around USD 10.3 million by November last year.

The World Bank also noted that the government took the priority in assisting those with formal agreements of employment, freelancers, and entrepreneurs as well as workers in informal sectors with the easement of requirements and increase of awareness.

The project will also increase the ability in limiting the impact of further situations of hardship in the future, stated the World Bank. The Income Support project is carried out by the Economic Ministry along with the National Social Protection Agency (NSPA) and the Maldives Pensions Administration Office.

The additional funding for the project is provided as a grant by the International Development Association (IDA) of the World Bank to assist developing nations under special easements.

The additional funding for the project will take the total funding to USD 34.4 million including a USD 6.4 million grant and a loan of a similar figure by the IDA.

The World Bank had also provided an emergency relief funding of USD 7.3 million to assist in the Maldivian government’s efforts against the virus in April last year.