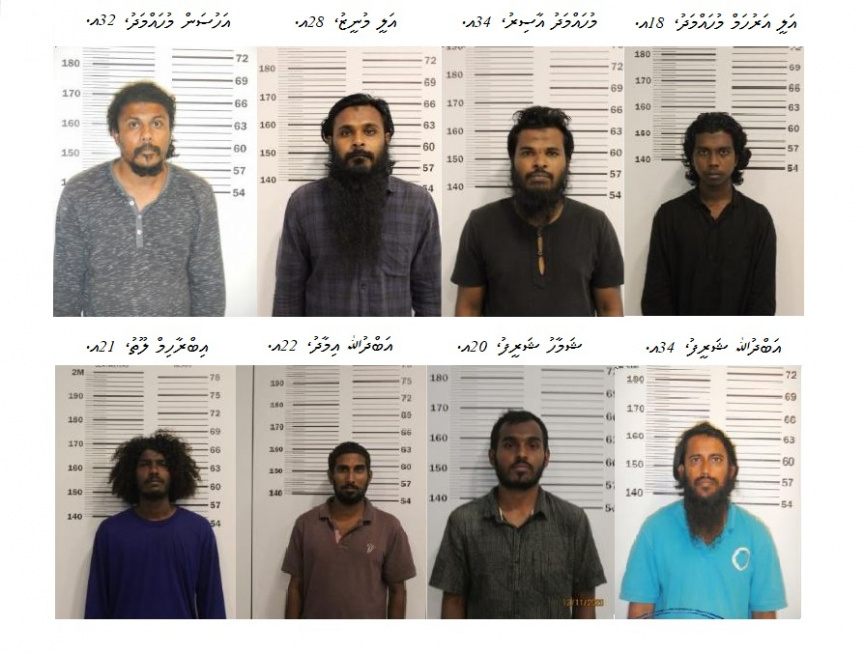 Maldives Police Service has requested the Prosecutor General’s Office for charges against eight suspects arrested in a counter-terror operation in Th. Thimarafushi in late 2020, who stand accused of plotting to blow up the laboratory at the Thimarafushi school as students sit for their O’ Level exam – at the direction of Islamic State Khorasan Province (IS-K).

The police released the identities of the suspects in a statement earlier this Tuesday.

According to the police, a formal request was made with the Prosecutor General’s Office for charges against the 8 suspects on Monday.

The 8 suspects arrested in connection to the case are:

The police conducted the operation which led to the arrests based on intel that one of the suspects – Abdulla Shareef – had been appointed as one of IS-K’s emirs, and intel of a conspiracy to prepare an Improvised Explosive Device (IED) on board ‘Nasah-3’ – a fishing boat operated by a group of individuals propagating extremist views – and carry out a terror attack in Maldives.

Maldives Police were also informed by an international intelligence agency that the suspects arrested from the boat were showing interest in joining IS’s militant activities and carrying out terrorist activities based on their internet search history and online interactions.

According to the police, the suspects planned on detonating the IED in the laboratory of the Th. Atoll Education Center located in Thimarafushi, while students sat for their O’ Level exam.

The police also uncovered the laboratory chemical storage facility at the school had been broken into at the time.

The police searched ‘Nasah-3’ and three properties in Thimarafushi in connection to the case, and found a document on a mobile phone seized from one of the suspects which indicated Abdulla Shareef had been appointed an emir by IS-K.

During the search on ‘Nasah-3’, the police found items which could be used to make an IED, and found cartridges containing traces of gunpowder from 10 meters under water from where the boat was.

The police said that based on the evidence recovered from digital devices seized from the suspects, they were plotting to make an IED and carry out a terror attack in Maldives.

The police uncovered the suspects belong to an extremist network which has taken root deep within Thimarafushi, and that they were targeting children, people living in poor conditions, and criminals who could be easily manipulated using money as recruits to expand the network.

“And at the same time, they are told that they do not need to necessarily obey their parents, encourage them to treat others who share similar beliefs as brothers, and encourage them to distance themselves from other people, portraying them as non-believers.”

The police said that they try to entice new recruits by assisting them using money and other means.

‘We also noticed that due to the spread of extremism in Thimarafushi, children have distanced themselves from parents, begun living separately, sometimes treat their parents as infidels and believe they need to be killed, treat the people they are shown as their ‘brothers’ to be far more important than other people in the island, disintegrating the relationship between them and others,” said the police in their statement.