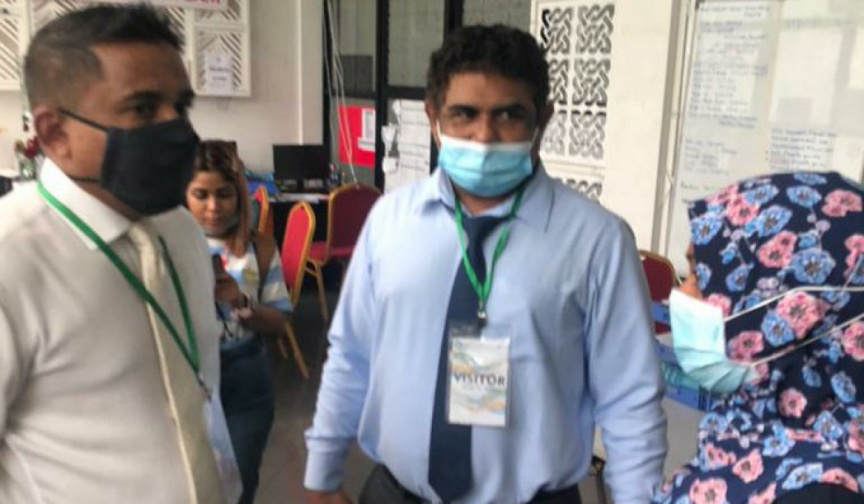 Dhiggaru MP Ikram Hassan (L) meets with the health worker he has been accused of assaulting at the Health Emergency Operations Center (HEOC) on October 12, 2020. (Photo/Twitter/Ikram Hassan)

Dhiggaru MP Ikram Hassan, who has been reported to the police for assaulting a health worker who attempted to take a nasal swab sample from him at a COVID-19 testing center in Male’, has apologize to the health worker in question following public backlash.

The incident in question took place at the COVID-19 testing center in Maafannu Madharusa on Friday, October 9.

Ikram in addition to being under investigation by the police for assault, has also been reported to the Parliament’s Privileges and Ethics Committee by the Maldives Health Professionals Union (MHPU).

In a tweet on Monday evening, Ikram said that has met with the health worker who administered nasal swab test on him, who he identified simply as “Shifana”, as well as her mother.

“And I apologized for what I may have said/done,” he said.

Ikram said he also wished to apologize for all members of the Rapid Response Team (RRT) at the Health Emergency Operations Center (HEOC).

Soon after the incident was reported by the press, Ikram had issued a statement via his Facebook account denying he assaulted the health worker.

“When she inserted the nasal swab and started rubbing it, I pushed away her hand from in front of my face to take out the nasal swab because it was so painful,” said Ikram.

“And I very angrily said that people who take samples so sadistically should not be allowed to take samples.”

Ikram said that the health worker refused to give him her name.

“Nothing more than this took place. If there are cameras there, watch the camera recordings and check whether this did not happen as I said,” he said.

However, MHPU’s statement provides a different account than Ikram’s own.

MHPU said that Ikram raised his hands against the health worker twice, said he had the right to hit her if she caused him pain, and repeatedly threatened to hit her.

“He issued threats, stating that he was a MP, that he cannot he harmed in that manner, and that he will lodge a complaint with the police,” said MHPU in their statement.

MHPU wrote in the statement that he repeatedly asked for the health worker’s name and spoke in a manner that implied she wasn’t a Muslim.

MHPU has asked the authorities for action against Ikram, stating that it condemns the attempts to justify the assault and harassment by a representative of the people against an ordinary worker engaged in public service.