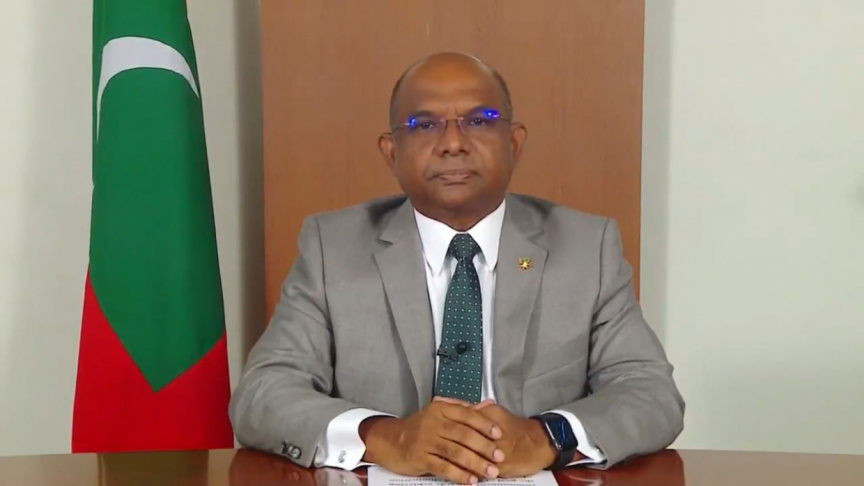 Maldivian Foreign Minister Abdulla Shahid delivers a video statement at a high-level event of the 75th Session of the UN General Assembly to commemorate the International Day for the Total Elimination of Nuclear Weapons on October 2, 2020. (Photo/Foreign Ministry)

Maldivian Foreign Minister Abdulla Shahid, on Friday, called on countries that have yet to sign the UN Treaty on the Prohibition of Nuclear Weapons to join the cause as a matter of urgency.

He made the call in a prerecorded video statement at a high-level event of the 75th Session of the UN General Assembly, held to commemorate the International Day for the Total Elimination of Nuclear Weapons.

In his statement, Shahd noted the importance placed by the UN on the elimination of nuclear arsenals and weapons of mass destruction, as it forms the basis of the UN’s founding ideals.

Shahid expressed concern over the continues existence of nuclear weapons across the world, and urged countries that have not ratified the UN Treaty on the Prohibition of Nuclear Weapons to sign the treaty as a matter of urgency.

He stressed on the benefits of disarmament as a vital component of the implementation of Goal 16 of the 2030 Agenda for Sustainable Development and of international peace and security.

Today I joined high level representatives from over 100 @UN Member States at the #UNGA75, to commemorate the international day for the total elimination of #NuclearWeapons. Nuclear disarmament is a vital component of global peace and security. @antonioguterres @UN_Disarmament pic.twitter.com/VrX0ZNBoAU

Shahid reaffirmed the traditional position of Maldives as a nation without any nuclear aspirations, and noted that Maldives was one of the original signatories to the Treaty on the Non-proliferation of Nuclear Weapons.

He reiterated Maldives’ commitment towards global peace and security and the role played by the Maldives as a strong advocate of regional stability, and noted that the country has signed the Arms Trade Treaty, the Cluster Munitions Convention and the Nuclear Prohibition Treaty.

International Day for the Total Elimination of Nuclear Weapons is celebrated annually on September 26. The event on Friday to commemorate the occasion was held virtually, and hosted high level representatives from over 100 UN member states.

The event aimed to raise awareness on the threats posed to humanity by nuclear weapons and the necessity for their total elimination in order to achieve a nuclear-weapon-free world.

'Not beneficial to go against a specific country'

VIA experiences decline in air traffic movements in Sep