Italy’s winning streak ends at 11 after draw with Bosnia 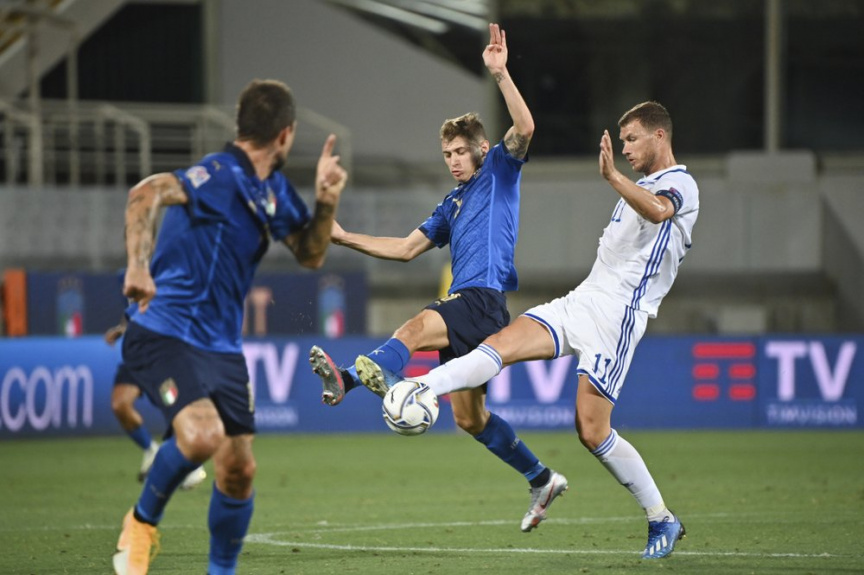 Džeko, who plays his club football with Roma and is therefore no stranger to Italy, put Bosnia ahead near the hour mark from close range.

“I’ve played against all of these guys many times,” Džeko said. “We know each other well.”

Stefano Sensi equalized 11 minutes later with a shot that was deflected in off a defender.

“I was right yesterday when I said neither Bosnia nor Italy were 100% fit,” Džeko said. “We could see the lack of sharpness, but it was a balanced enough game, I think both sides ultimately had one or two chances.”

Also in League A, the Netherlands beat visiting Poland as Steven Bergwijn tapped in for his first international goal -- giving the Oranje 30 goals in their last 10 competitive home games.

In Florence, both sides hit the post early in the second half.

First, Bosnia’s Armin Hodžić got past goalkeeper Gianluigi Donnarumma before striking the woodwork from the sharpest of angles.

Then Italy’s Lorenzo Insigne found the goalframe with a header.

Two minutes later, Džeko had time following a corner to let the ball bounce before scoring from six meters (yards).

The last match Italy failed to win was a scoreless draw with Portugal in November 2018 -- also in the Nations League.

“The winning streak had to end sooner or later,” Italy coach Roberto Mancini said. “We’re glad it was with a draw and not a defeat.”

With international football returning for the first time since the outbreak of the coronavirus pandemic, all 54 games that are scheduled to take place across the continent over six days are taking place with strict hygiene measures, including the exclusion of fans. Players had to pass mandatory pregame tests for COVID-19.

In League B, a Czech staff member tested positive for the coronavirus — the second such case in the team’s squad this week — before a 3-1 win in Slovakia.

After the match, the Czech federation said the team’s home match against Scotland on Monday in Olomouc would not take place due to additional cororonavirus concerns.

A statement on the FACR website read: “The national team will not play against Scotland on Monday due to representatives decision and the current situation with the Covid-19.”

The Czech plans ahead of the Slovakia match had been affected after West Ham midfielder Tomas Soucek and RB Leipzig striker Patrik Schick were told to self-isolate after coming into contact with the staff member who tested positive for the virus.

In League C, Kazakhstan won 2-0 in Lithuania and Albania won by the same score in Belarus.