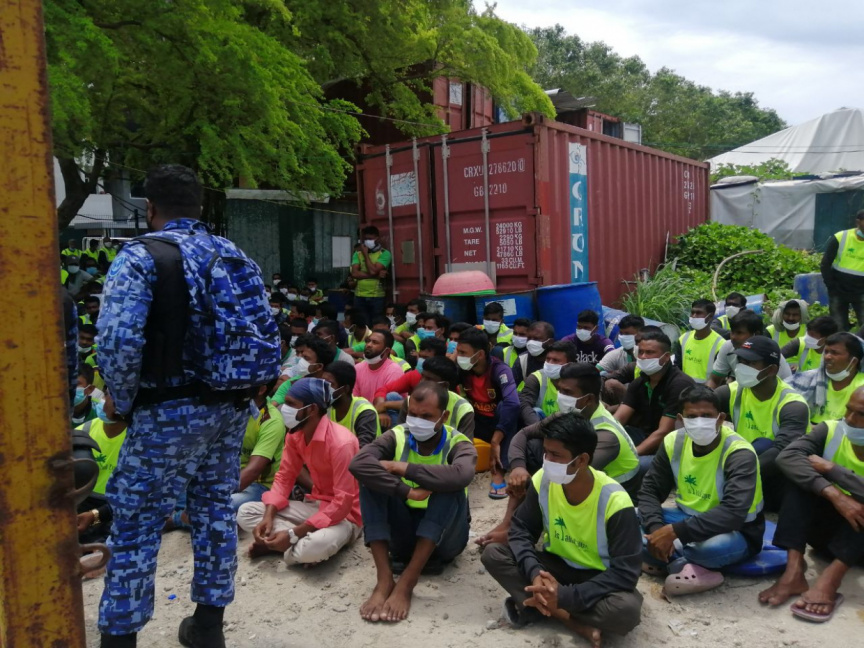 Migrant workers employed by Island Expert in a site in Hulhumale' stage a strike over unpaid wages on July 13, 2020. (Sun Photo/Ahmedulla Abdul Hadi)

The 41 migrant workers arrested in confrontations with the police during a strike in suburban Hulhumale’ over unpaid wages have been repatriated to their home countries.

The 41 workers were arrested from Hulhumale’ on July 13, after a strike staged by migrant workers employed by Island Expert over months of unpaid wages escalated into violence. The workers told Sun in an earlier interview that they have not been paid their wages in seven months.

Island Expert’s Managing Director Anon Songpanya told Sun on Thursday that the 41 workers have now been repatriated to their home countries.

“41 were arrested in connection to the incident on July 13. They have been repatriated after settling all unpaid wages. We received the assistance of the police in this,” he said.

Songpanya said that 38 of the workers were from Bangladesh, while the remaining three were from India.

The migrant workers employed by Island Expert held their first strike on July 6, demanding that the company pay their wages within 10 days.

They staged a second strike on July 13 after the company failed to settle their unpaid wages, during which some 150-200 disgruntled workers threw bricks at police officers who attended the scene, injuring several police officers and damaging police and private property.

Undocumented migrants to register for vaccine

Bodufinolhu workers without electricity and water

193 unlinked coronavirus cases in one week