India-funded ferry for Fehendhoo students handed over to Maldivian government 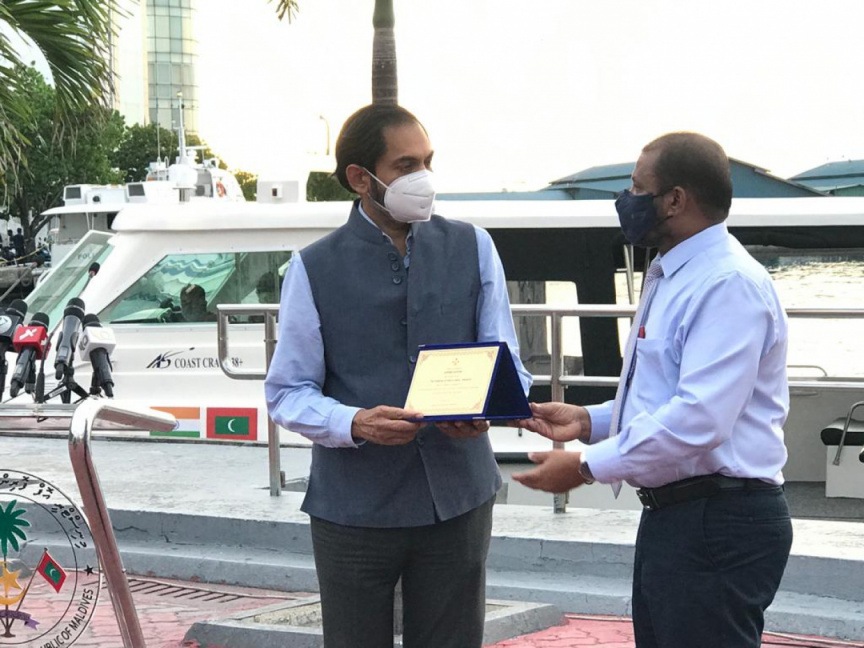 The Indian government, on Wednesday, handed over a ferry built with its financial support for students from B. Fehendhoo who commute to neighboring B. Goidhoo for their studies.

The ferry was handed over to the Maldivian government by Indian High Commissioner Sunjay Sudhir in a ceremony on Wednesday evening.

The ceremony was attended by Maldivian Foreign Minister Abdulla Shahid, Minister of State for Education Ahmed Riyaz, Thulhaadhoo MP Hisaan Hussain, and other officials from the Maldivian government and the Indian High Commission in Male’.

The project was funded under the grant assistance of USD 6.9 million (MVR 160 million) approved by the Indian government for high-impact socio-economic projects in Maldives in early 2019.

A total of MVR 2.5 million was allocated to the Education Ministry to design and build the ferry, which will ensure that students from Fehendhoo are able to travel to school safety and have uninterrupted access to education.

Education Ministry has stated the ferry will accommodate 30 students

Fehendhoo is one of Maldives’ least populated islands. The declining residential population led to the closure of the island’s school in 2008, after which the island’s students travel to Goidhoo, which shares a lagoon with Fehendhoo, on a small dinghy boat arranged by the Parents Association and the island’s council.

Speaking at the ceremony, Foreign Minister Shahid said the project epitomized the realization of the long awaited solution to the challenges faced by the students of Fehendhoo and their parents.

The grant assistance of USD 6.9 million was approved to Maldives during the late Indian External Affairs Minister Sushma Swaraj’s visit to Maldives in March 2019. Funds have been allocated for 18 projects under the grant.