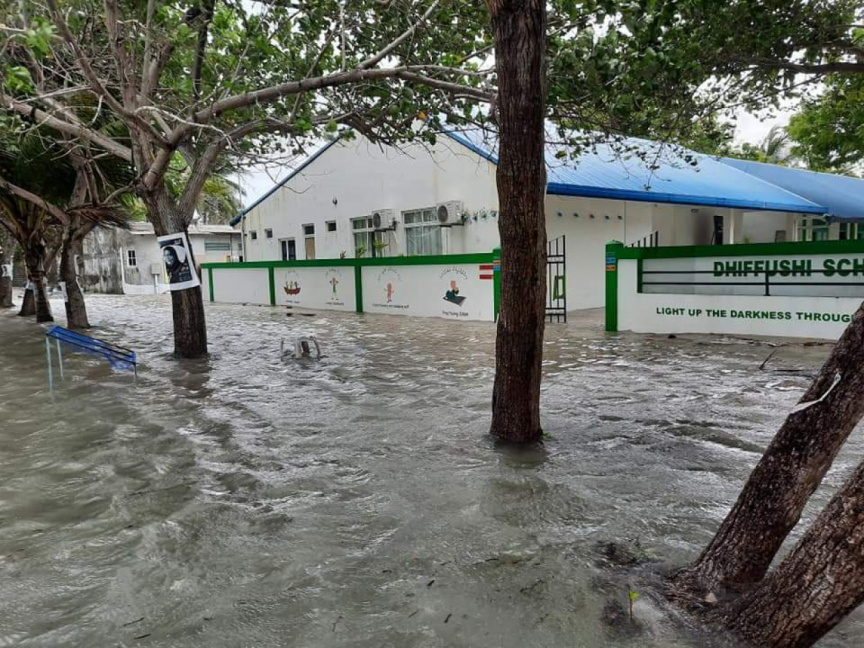 Bad weather across Maldives has resulted in severe tidal flooding in several island islands, including the capital Male’ City.

Maldives Meteorological Service issued a white alert for islands across Maldives from 12:45 to 16:00 this Monday, warning of swell waves.

Some of the islands experienced the most severe tidal flooding in recent history.

Swell surges were experienced in Male’ City resulting in extensive tidal flooding in the North Harbor and the Commercial Port in Male’ City.

Some of the islands outside of the capital which have reported swell waves include K. Dhiffushi, K. Thulusdhoo, A. A. Rasdhoo, N. Manadhoo, R. Vaadhoo, and L. Kunahandhoo.

Residents of some of the affected islands described it as the most severe swell waves in recent times. Some of those who spoke to Sun said they felt like their island was sinking under water. Flood water in some of the islands reached ankle-high, damaging property and household appliances.

Thulusdhoo Council president Ahmed Anees told Sun the swell waves have now ceased affecting the island, but has resulted in flood damage to approximately 10 houses located near the coast.

He said that the police and residents stacked bags of sand at the entrances of houses near the coast.

Dhiffushi Council president Ibrahim Azeem told Sun that the swell waves began affected the island at approximately 13:30. He said that the severity of the swell waves have lessened as the tide has begun to recede.

He said that tidal flooding affected 20 houses at the island, and that bags of sand have been stacked at the entrances of houses to minimize the damage.

A. A. RASDHOO: DAMAGE TO SIGNIFICANT INFRASTRUCTURE

He said that tidal flooding affected the A. A. Atoll Council office, the school, and six houses.

Household appliances in the six houses were damaged in the flooding.

Abdul Jaleel said that bags of sand have been stacked at the entrances of affected properties and that work is under way to drain the flood water from the island.

Maldives Meteorological Service forecasts scattered showers and a few thunderstorms to be experienced across the country, and for seas to be slight becoming moderate during showers in the southern atolls and moderate elsewhere.

A white alert has been issued for heavy rain and thunderstorms with gusts of 45 miles per hour to islands from Lh. Atoll to V. Atoll, effective 14:15 to 20:00.