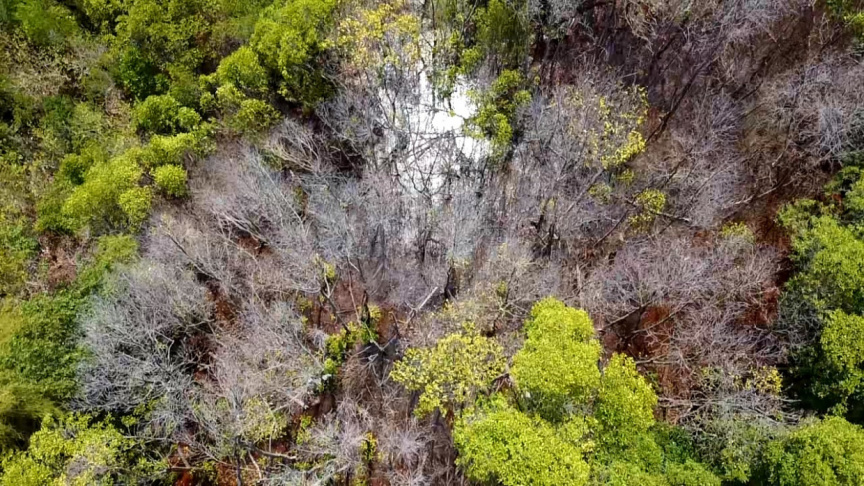 The wetland of Neykurendhoo, is some of the biggest in the country. The most prominent mangrove in the area is the small-leafed orange mangrove, locally called kan'doo. Residents of Neykurendhoo grew up by sourcing food from these trees. The strong wood from the small-leafed orange mangroves was used to build boats. The area is nature’s gift for the island and remains as its pride.

However, this is slowly becoming the past. Ali Adam said that the mangroves were not as thick and strong as they used to be. Dangers faced by the mangroves have led to questions surrounding its future. Tree leaves in a large portion of the area have turned yellow. The trees on the other hand are withering and dying.

Neykurendhoo is not the only location to be hit by this phenomenon. The wetlands of H.A. Kelaa and N. Kendhihulhudhoo are also experiencing similar issues.

Trees drying up, large portions of the mangroves are perishing

The largest of northern mangrove wetlands can be found in H.Dh. Neykurendhoo, H.A. Kelaa, H.A. Baarah, H.Dh. Keylakunu and N. Kendhikulhudhoo. Out of the wetlands protected by the government, Kelaa and Neykurendhoo began to see their wetlands drying up around two months ago. But the phenomenon has been occurring in Kendhikulhudhoo for a couple of years.

Residents of Neykurendhoo began to discover the status of the prized wetlands when they ventured into the area to collect mangroves for Ramadan.

Ali Adam estimates that around five hectares of the mangroves have died since then. That is around one-third of the total area. Signs show that the effect is still expected for more areas.

“Trees with no leaves, no barks, and all dried up,” said Adam.

The Blue Peace Organization had identified similar occurrences in the mangroves of the island almost four years ago. However, it had not occurred to this extent back then. Adam said that what was being witnessed now, was on a whole different scale.

“We noticed the death of some trees in 2018. But now, we are seeing it on an extraordinary level, starting from February,” said Adam.

The phenomenon was noticed in Kelaa during that time as well.

Kelaa Council President Adam Ufraan said that the situation in Neykurendhoo was being replicated in Kelaa as well. Leaves turning yellow, and withered trees with no leaves that eventually die.

A senior official of an organization of Kelaa named “IDEAS”, said that the level of the mangrove destruction was previously unseen and unheard of in the island.

“This has not happened to this extent before. Elders of the island also say that they had not seen things deteriorate to this level before. No one knows what is happening. Also, the destruction is noticed on the side closer to land, rather than the sea,” said the official.

Kendhikulhudhoo Council president Saffath Ahmed said that the natural destruction of the mangroves were noticed on the island seasonally almost every year. Currently, being experienced was the season for the phenomenon, according to Saffath.

A farmer from the island, Mohamed Shakir also said that the natural destruction was something that occurred after the devastating 2004 Tsunami. He had noticed that the effect was more severe during rainy seasons where storm surges and sea swells occur. A large portion of the wetlands had perished since February in Kendhikulhudhoo as well.

“Since it is the season to collect mangrove trees, many would venture into the area for the purpose. I also went to observe. I noticed that trees have turned yellow in the Kudafalhu and Tholhifalhu area when I went.” Said Shakir.

The phenomenon is affecting the wetlands closer to the Kendhikulhu ward of the island. And even though not as much, the same was being noticed in the Kulhudhoo ward as well. Where the seawater enters the wetlands, is where the phenomenon affects the least.

Taking a look at some other islands of the north with wetlands, Sh. Kanditheemu is also experiencing similar effects to its wetlands. However, the island Council said that it was not so severe on the island.

H. Dh. Vaikaradhoo's wetlands were also left with damages due to erosion activity. However the phenomenal effects were not observed in Vaikaradhoo, and some other northern islands like H.A. Baarah, H.Dh. Kurinbee and the protected island of Keylakunu.

All the experts that spoke regarding the matter unanimously agreed on one point. That more research and surveys needed to be done before an exact reason could be determined. Whether all of the wetlands are experiencing the same phenomenon can only be decided with further research. They did, however, note possible reasons for the phenomenon.

An official from Bluepeace Maldives said that wetlands were usually areas where seawater is deposited naturally to some extent. However, small-leafed orange mangrove areas (kan'doo faa) would see less of seawater compared with other types of mangroves. The official said that a lack of natural seawater depositories could possibly lead to the death of these mangroves.

With the lack of seawater, plants that grow in freshwater will start to sprout and compete with the mangroves for nutrients. As a result of this, the mangroves may not get enough nutrients and eventually die down, were the assertions made by Bluepeace as a possible cause of the phenomenon.

However, if the phenomenon was occurring in two or three islands at the same time, it was less likely that the lack of seawater was causing this. It could possibly be a disease, which would need additional research, said the organization.

“If it occurs in two islands, then it is possible that it is a disease," said the organization.

Fogging could cause such effects, said the organization. However, Councils of the islands where the phenomenon was being identified, have not conducted any fogging operations.

Adam Abdulla, an environmental advocate, said that it was possible that a sudden deluge of seawater in the area could be causing the phenomenon. If the deposited seawater remains in the area for a long time, it could cause the destruction of the mangroves. “Waterlogging” occurrences due to heavy rains could also be a reason for this. Another possible reason was the overflow of water in the mangrove, which could prevent the roots of the mangroves from obtaining oxygen.

An insect or disease was also another possible explanation. Neykurendhoo island Council confirms discovery of a worm from its mangroves.

An expert from the Fisheries and Agriculture Ministry said that a fungal disease could be the possible reason behind the natural phenomenon.

“This may happen sometimes due to wetness that causes a fungal dampening. The area may also be affected by Hairy Caterpillars or Uproctis Fraterna (Huvani) during breeding seasons. However, most of the time, the insect does not affect small-leafed orange mangroves,” said the official.

Ministry begins work to save the mangroves

“The scale of it, the spread of it, we do not know yet," said Dr. Naseer. According to him, the Environmental Protection Agency (EPA) is also actively taking part in the matter now.

How to conduct a survey was now being deliberated in collaboration by the Agriculture Ministry Center in H. Dh. Hanimaadhoo. Due to the lockdown on the capital, it would be difficult for officials of the Environment Ministry to travel to the location.

“The Agriculture Ministry has plant experts. We would only know the kind of disease or issue when a combined assessment is made, possibly through the Hanimaadhoo Center. So, that is how we are deliberating.” Said Dr. Naseer.

The mangroves of the north are close to the hearts of northerners. It had saved some islands of the north from starvation during the infamous Bodu Thadhu period of the Second World War. They were saved from starvation with the availability of the mangroves as food in plentiful supply. The mangroves were also very much utilized for building traditional wooden boats. It is imperative that the tranquil areas are maintained without being destroyed, for future generations to reap its benefits as well.

Tax to be imposed on plastic bags starting June 2022