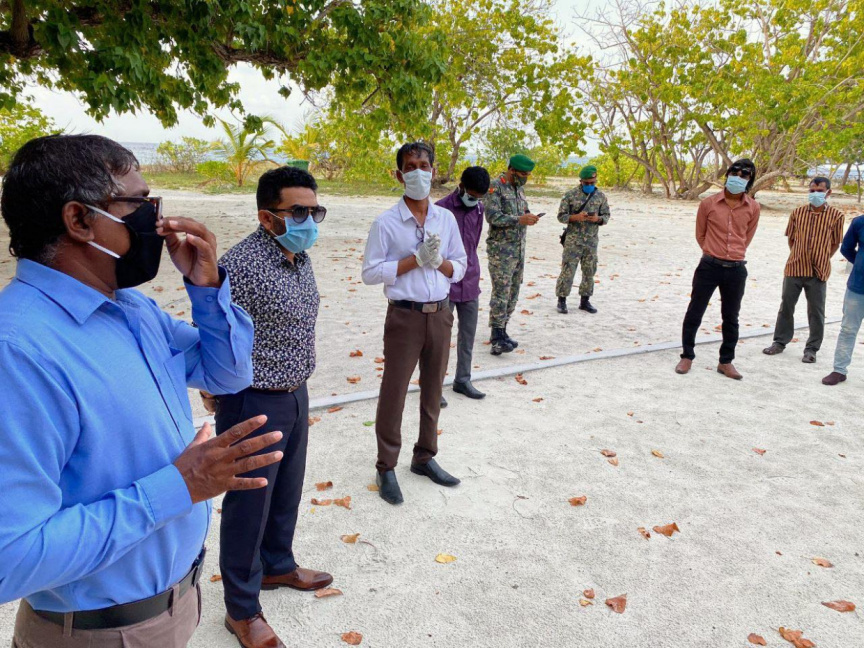 A team of medical experts as well as the Health Minister and senior government officials traveled to the island of Sh. Narudhoo which has reported the highest number of COVID-19 cases in the country, apart from Male’ City on May 3, 2020.

A team of medical experts, as well as the Health Minister and senior government officials, has traveled to the island of Sh. Narudhoo which has reported the highest number of COVID-19 cases in the country, apart from Male’ City.

Narudhoo Council President Ahmed Arif stated that he had shared with the team the concerns of the islanders.

“We shared concerns regarding the lack of equipment such as masks and gloves. The government has not provided any such materials to the island after this situation came upon us.” Said Arif.

Arif stated that the Health Minister had not directly stated the provision of these pieces of equipment but pledged support financially, for which a date was not provided.

“No indication of this (providing equipment) was given. Finishing up, the financial assistance of MVR 10,000 from the Health Ministry budget was noted. We don’t know if we will receive it after the situation is over.” Said Arif.

He added that the service providers on the island can only assist the people of the island if they have the proper equipment.

“I noted at the last minute that the funds to charter a seaplane to arrive on the island could have been better spent if it was provided to us. That is a waste of funds,”

“The islands would not be happier with their arrival. They would be happier if the costs of that were spent were provided as food and equipment to us. Also, no matter who they are, it is a very frightening prospect to come to the island right now.” Said Arif.

The island of Narudhoo, which has a population of 600, has reported 11 positive cases of the virus. The first case was reported on April 16.

Young boy rescued after getting trapped between walls

Narudhoo returns to normalcy after weeks in lockdown

Excess dates to be distributed in quarantine facilities