With Male' in lockdown, Police take care of feathered friends in public squares 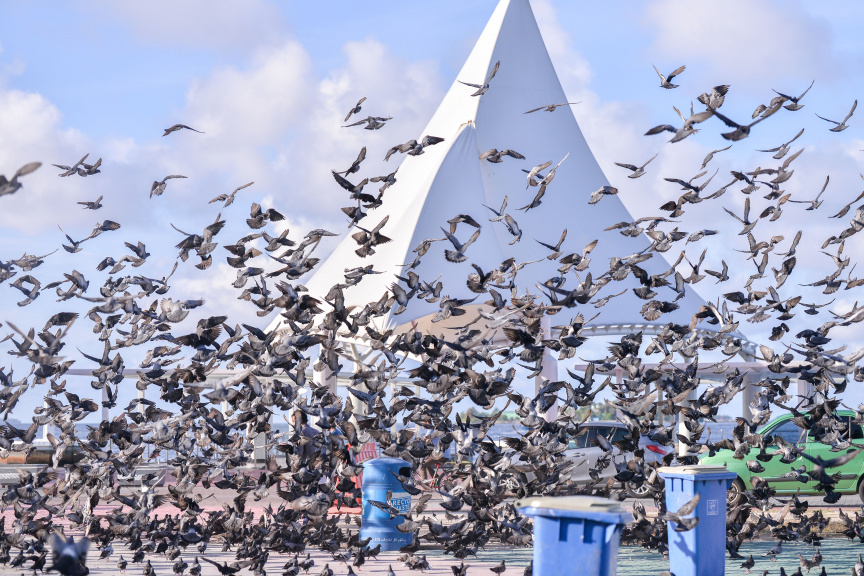 Pigeons that usually gather in the Republic Square in the capital have been so used to people feeding them that the square has become a home for them.

However, after an unprecedented lockdown on the capital, the feathered residents of the Republic Square have no one to feed them as their human companions stay at home due to the Covid-19 restrictions on the capital.

Only a few essential workers are allowed on the roads by the authorities. Maldives Police Service, are some of the brave heroes that risk everything when performing their duties for the country and have devoted the little spare time they have to donating blood to Maldives Blood Services and feeding the feathered friends in the Republic Square.

Residents of Male’ City have seen a massive change brought upon their lifestyle. Most had enjoyed spending time outdoors ona daily basis, in coffee shops, parks and squares with their families and friends befoer the lockdown. Republic Square is one of the most scenic locations for the residents of the capital to visit for some quality time.

The massive Maldivian flag, the scenic harbor area and the pigeons gathering in the square much to the delight of young ones, and the fact that the area is somewhat less crowded and spacy when compared to other areas of the capital mean that it is often frequented by people.

The virus has meant that almost everyone is confined to their homes for safety reasons. And one thoughtful individual had taken to social media to request the Commissioner of Police Mohamed Hameed, to feed the pigeons in the Square in front of the main Headquarters of Police. The person had reminded the Commissioner that the pigeons depended on humans for food as has been the case for decades now.

The individual got a most satisfying reply by Commissioner Hameed who replied that his officers were making sure that the pigeons were being fed and even noted that officers had begun to donate blood after shortages of blood supply led the Maldives Blood Services to request donations.

A heartwarming example of kindness and compassion shown by brave frontline workers as the country battles to contain one of the most dangerous situations it has ever faced.