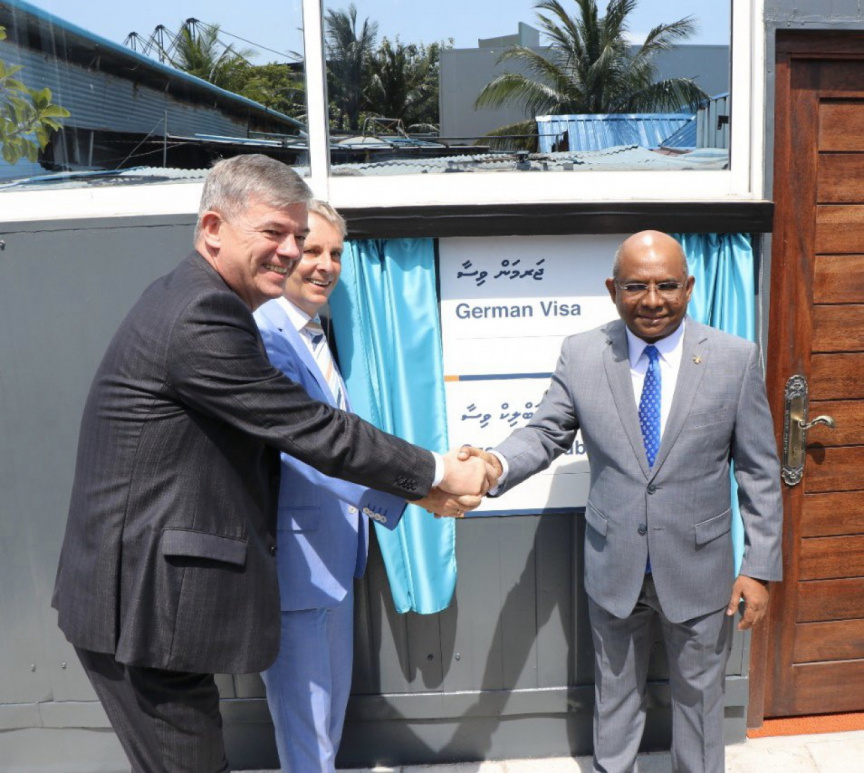 Speaking at the inauguration, Shahid said that the permanent center meant an end to the time-consuming and costly process undertaken by Maldivian citizens who apply for Schengen visa through embassies based in Colombo or New Delhi.

He said that discussions regarding opening the visa center had begun in 2019, and that the one-year-long discussions had come to fruition with the support of the German government, and especially Ambassador Rohde.

Shahidthanked the German government, and Ambassador Rohde for taking the initiative to establish the center in Male’.

He said that establishment of a permanent visa center in Maldives had long been a demand of its citizens, noting the high number of people who seek visa services to attend the annual ITB Berlin Fair.

The Foreign Ministry, in collaboration with the German Embassy, had previously opened temporary biometric clinics to process such visa requests ahead of the ITB Berlin Fair.

But a permanent solution had remained out of reach until now.

“The visa center opened today will be a huge convenience of Maldivians who seek German-Schengen visa. Our goal is to facilitate visa-free travel for Maldivians to EU [European Union] countries in the future,” said Shahid.

He also thanked the Czech government to its support towards the initiative, which he said reflected on the growing ties of friendship and cooperation between the two countries.

While the center will initially cater to Maldivian citizens travelling to Germany and Czech Republic as the main destination, Shahid said that he expected more European countries to follow suit and join with VFS in the close future.

Several European countries have already expressed interest in offering visa services in Maldives, and it will likely require an expansion to the visa center soon, he said.

Both ambassadors Rohde and Hovorka expressed confidence the initiative would serve to further strengthen the increased tourism and trade between Maldives and their respective countries.

The Maldivian government had signed visa waiver agreements with the United Arab Emirates, Russia, Morocco and Thailand, and expanded its visa arrangements with neighboring India and Sri Lanka in 2019.

Akram on top of shortlisted candidates for EC