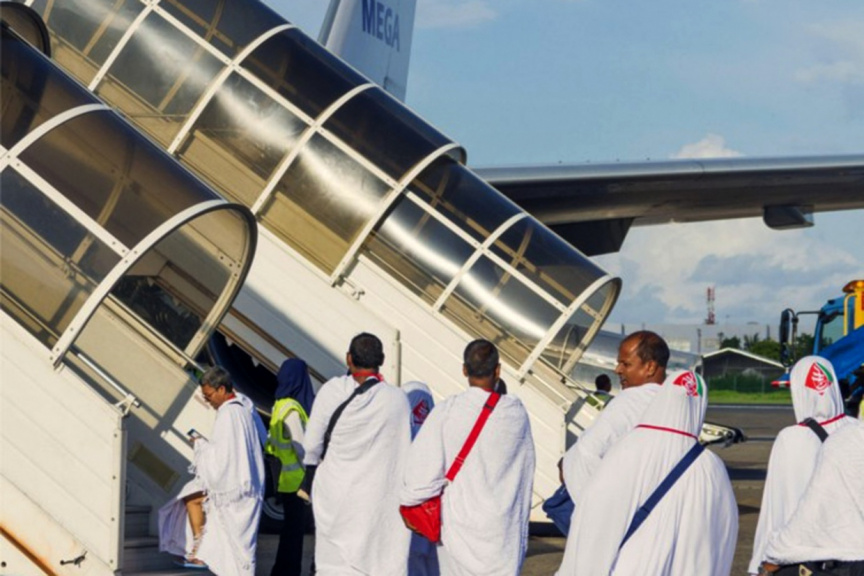 Pilgrims board a plane at Velana International Airport. (File Photo)

Maldives Hajj Corporation, on Thursday, cancelled the Umrah pilgrimage scheduled for March, following the imposition of a travel ban on foreigners to the holy sites in Saudi Arabia in a bid to avoid a potential outbreak of the deadly COVID-19 virus in the country.

Hajj Corporation, in its statement, stressed that the travel ban by the Saudi Arabian government had been imposed following guidance of World Health Organization (WHO), and was for the health and safety of Saudi citizens and foreigners who visit the Kaaba in Mecca.

The Saudi Arabian government’s statement announcing the travel ban does not say when the ban will be lifted, or provide any instructions regarding the issuance for the annual Hajj pilgrimage which will take place in May.

The travel ban extends to the holy city of Mecca and the Kaaba and the Al Masjid an-Nabawi in Medina. The issuance of tourist visas for people from countries experiencing outbreaks of the COVID-19 virus has also been temporarily suspended.

While Saudi Arabia itself is yet to identity any confirmed cases of the virus, more and more cases are being identified from outside China, the epicenter of the outbreak, including Middle Easters countries which have confirmed 240 cases – most from Iran where the death toll has reached 22.

The Hajj Corporation announced on Thursday that it has also cancelled the press briefing scheduled for Friday, following the cancellation of Umrah pilgrimage for March.

Many Maldivian students and families travel to Saudi Arabia to partake in the Umrah pilgrimage during the mid-term break in March.

Hajj mission expenses: Over a million on 5 people