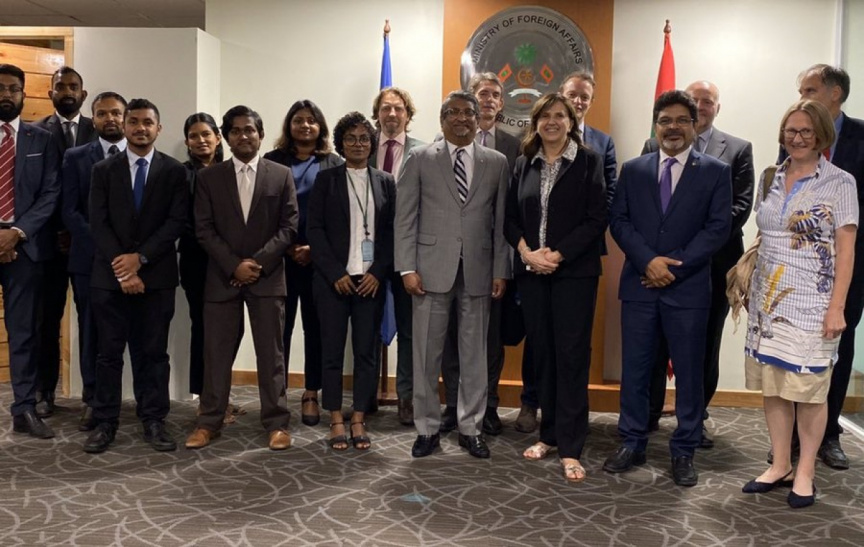 The First Senior Officials Meeting between the Maldives and the European Union (EU) was held on 9 February 2020 in Malé, Maldives. (Photo/Foreign Ministry)

The First Senior Officials Meeting between the Maldives and the European Union (EU) held at the Foreign Ministry yesterday, saw the Maldives and EU launch a new project in efforts to counter terrorism and prevent violent extremism, under the MVR 43 million allocated for EU-Maldives security cooperation.

The project launched today will be implemented jointly with the United Nations Office on Drugs and Crime and local stakeholders.

Both the EU and the Maldives also reiterated their interest to step up cooperation on global challenges such as climate change and environmental issues.

EU officials highlighted the Financing Agreement of MVR 85.8 million to support the Maldives to implement its Nationally Determined Contributions, and the MVR 771.6 million loan by the European Investment Bank (EIB) to support renewable energy projects signed in 2019 as a demonstration of EU's commitment to step up cooperation in this area.

The meeting gave evidence to the strengthened bilateral relations between the two partners since the Maldives renewed its commitment to consolidate democracy, ensure good governance, and strengthen the rule of law following the Presidential elections in 2018. The Maldives and the EU reiterated the importance of deepening ongoing cooperation and forging stronger ties.

The discussions were co-chaired by Ahmed Khaleel, Minister of State for Foreign Affairs of the Maldives and Ms Paola Pampaloni, Deputy Managing Director for Asia and Pacific, European External Action Service.

During her visit, Deputy Managing Director Pampaloni also made courtesy calls on the President Ibrahim Mohamed Solih, and Speaker of the Parliament, Mohamed Nasheed, and held meetings with civil society, political parties, and members of the diplomatic community.