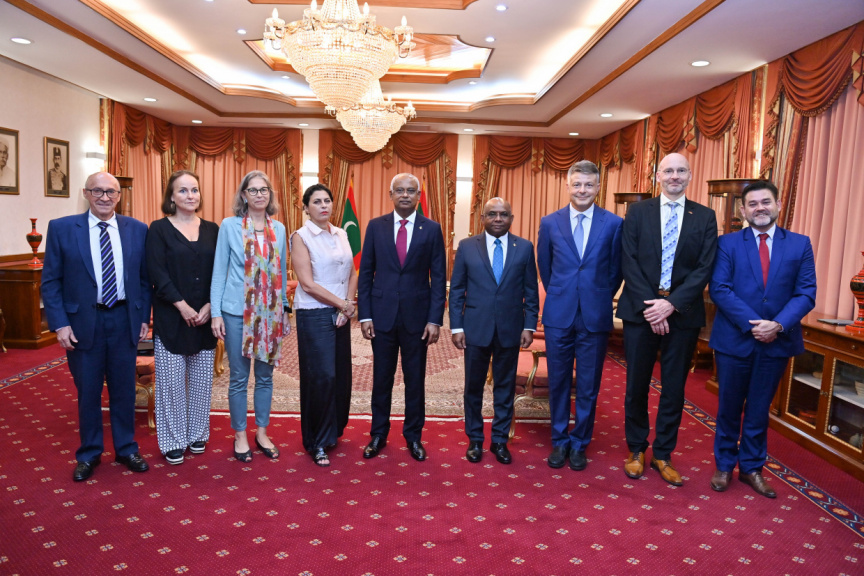 President Ibrahim Mohamed Solih, on Wednesday, held discussions with a delegation of European Union (EU) ambassadors on easing the tariffs that EU nations have imposed on the Maldives' fisheries sector exports.

The EU ambassadors who are in the Maldives to attend the sixth ‘Maldives-EU Policy Dialogue’ paid a courtesy call to President Solih on Wednesday at the President’s Office.

During this meeting, President Solih and the delegation members spoke about the agenda for the Maldives-EU Policy Dialogue – during which the President raised the issue of easing Schengen visa facilitation for Maldivian travelers and easing the tariffs that EU nations levied on the Maldives' fisheries sector exports.

Meanwhile, the EU delegation expressed interest to expand its engagement with Maldives, noting that Maldives is increasingly becoming a crucial actor on the international stage. They particularly highlighted the leading role played by the Maldivian Presidency at the 76th Session of the United Nations General Assembly in this trajectory.

They also congratulated the Maldives on winning its candidature for the United Nations Human Rights Council (UNHRC) for the term 2023-2025 – underscoring the significant role that Maldives is situated to play through the UNHRC in bridging cooperation between Western nations and Asia.

Concluding the meeting. the delegation members assured their commitment to work closely with Maldives to elevate the existing Maldives-EU cooperation on all mutual fronts.