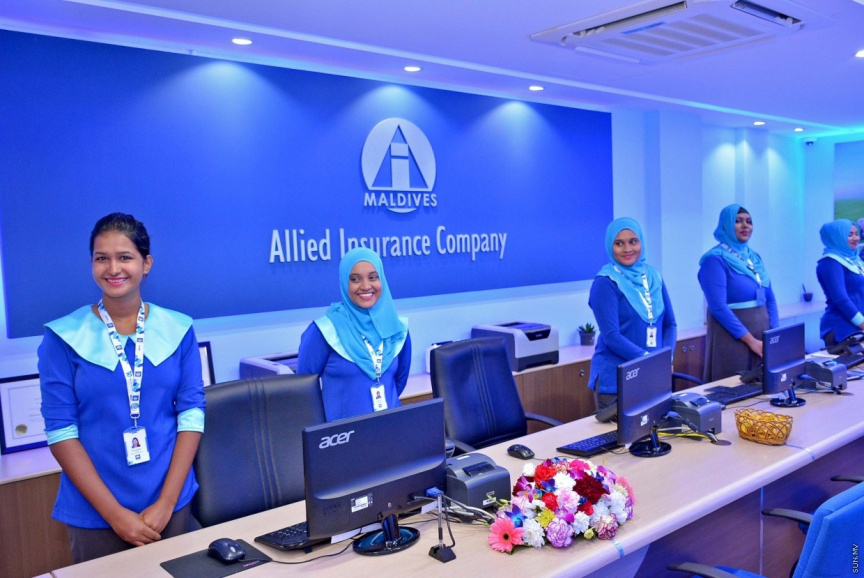 Employees of Allied Insurance Company are pictured in the head office of the company. The company turned 35 years on January 30, 2020. (Sun Photo/Ali Naseer)

Allied Insurance Company formed in 1984 under a partnership with STO and United Kingdom’s Commercial Union Assurance Company turns 35 years today. The company which was created for STO’s private insurance purposes has now branched out and grown to become the closest insurance partner of Maldivians.

At the end of this long journey, Allied has turned out to be the most successful Maldivian company. No matter how big or small, Allied does not hesitate to compensate its customers in whatever incident that befalls them. So, what is the secret behind Allied that has seen the company turn into a giant of the insurance sector?

An employee who started from the bottom and has now reached the top, Ahmed Saabig, the General Manager of the company stated to “Sun” that what differentiates Allied from the rest is that it provides a total solution to its customers in terms of compensation. The process of the company is not just limited to providing compensation to its customers. Allied works as the closest partner in the recovery of their customers., according to Saabig.

Saabig indicated to the 2004 Indian Ocean Tsunami disaster as proof of this mentality. The company took the initiative in ensuring that its customers got back on their feet.

What may now be a bustling and busy company with a large number of employees, Allied faced the Tsunami crisis in 2004 with just a handful of customers. Saabig was one of the three employees at the company office back then and describes the initiative as the biggest step taken by the company in its long journey.

“The Tsunami disaster is the biggest of the biggest. It affected most of the Maldives, including our customers. We provided the assistance and necessary help back then. The situation at the time did not call for financial assistance, but psychological help, and the next steps to be taken in recovering. That is what we did. That is also what our mentality in insurance is about.” said Saabig.

Even with a small team, Allied did not constrain itself to just assisting those in the capital Male’. The whole company was on alert to assess the extent of the damage. The Allied team traveled to different islands and resorts who were its customers.

“In reality, the extent of the damage and what is covered by insurance, it cannot be assessed initially. We traveled to the islands to understand this. We indirectly assisted others during those travels.” said Saabig.

Disruptions to the communications services on the day of the disaster caused some difficulties in assessing the damage. However, Allied extended its helping hand by traveling to the locations affected. There were no senior or junior officials in the team on that day, and everyone took part in the effort collectively as a national and humanitarian service.

Allied took lessons from the Tsunami crisis instead of melancholy. In addition to Allied, the whole country learned the importance of insurance because of the crisis. Allied placed the foundation of a new era from those lessons.

“In truth, people do not see insurance as a necessity. But the reality is, when a situation arises, insurance is the closest helper…most did not know the importance of insurance before the Tsunami crisis. So, most people were not insured (when the Tsunami disaster happened).” said Saabig.

15 years have passed on since the disaster, and Allied has taken great strides in these years. The hard work and dedication of the team have resulted in a trust being created between the people and the company. A large number of people obtaining insurance services and recognizing the importance of the service. The success is what satisfies the team of Allied the most.

The message that the company wants to impart on its 35th anniversary is to get insurance for anything and everything whether it is goods or homes at the right price. That is how Allied can extend its hand when a calamity arises.

Allied is certainly the most experienced and closest partner in the insurance sector of Maldives.

The long journey of the company has turned it into an insurance giant not just in the Maldives, but in the region as well.

Allied to hold fun-filled event for families on Nov. 12

Applications open for position of CEO of MACL