Bahraini couple become the first visitors to Maldives in 2020 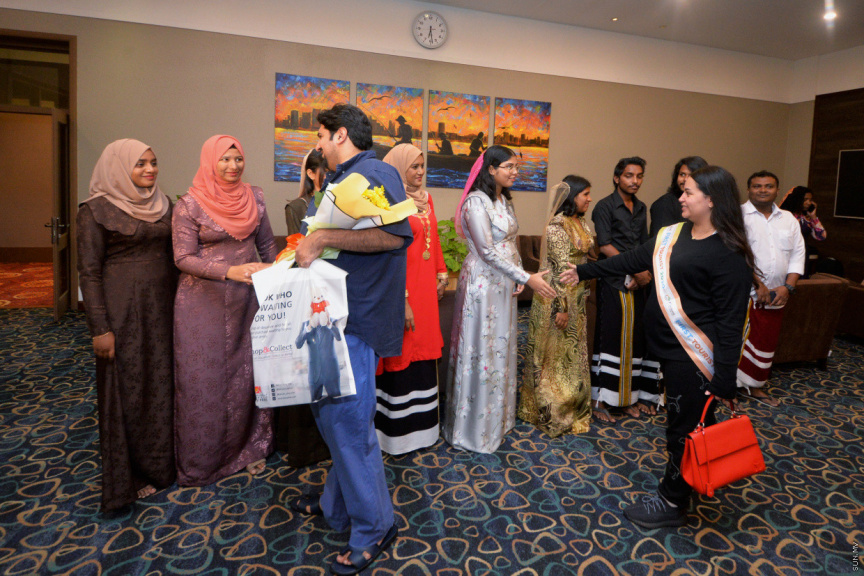 Mr. and Mrs. Alamer from Bahrain are greeted upon arrival to Maldives on January 1, 2020. (Sun Photo/Ahmed Awshan Ilyas)

Maldives has welcomed its first tourists of the New Year 2020, and they came all the way from the Middle East.

They were greeted upon arrival at the Velana International Airport by Tourism Minister Ali Waheed and Managing Director of Maldives Marketing and PR Corporation (MMPRC), Thoyyib Mohamed.

Alamer told the press gathered at the VIA that while his wife had made a previous visit to Maldives, it was the first time that he was visiting the country.

“I thank everyone for the warm welcome we received as the first tourists of the year. This had been an unexpected experience,” said Alamer.

“Our hope for this year too, In Sha Allah, is for the greatest achievements possible,” said Thoyyib.

Highlighting on the Bahraini market, Thoyyib said that though it may not be significant in terms of arrivals in comparison to leading source markets, it remained, nevertheless, an important market.

He noted that tourists from the Bahraini market visited Maldives at great expense.

“We can achieve a good lead in this market,” said Thoyyib.

He noted that the MMPRC will be releasing a supplement in partnership with Vogue Arabia – a move which aims to boost tourist arrivals from the Middle East.

Meanwhile, Tourism Minister Ali Waheed noted that the government policies on tourism will be reinforced with its strategic action plan, driving far greater achievements this year.

“We are actually targeting boosting tourist arrivals to two million between 2020 and 2021 or the end of 2021. So there’s no real pressure on us this year,” said Ali Waheed.

“Our target for this year is, to achieve a number between our targets for those two years, sometime in the end of this year. We shall keep this a surprise,” said Ali Waheed.

He too, expressed satisfaction with the promotional activities held last year, and expects it to have a positive impact on arrivals this year and even the next.

He said the reinforcement of diplomatic ties with bilateral partners and the establishment of political stability in Maldives as played a driving force in the recent growth of the tourism sector.