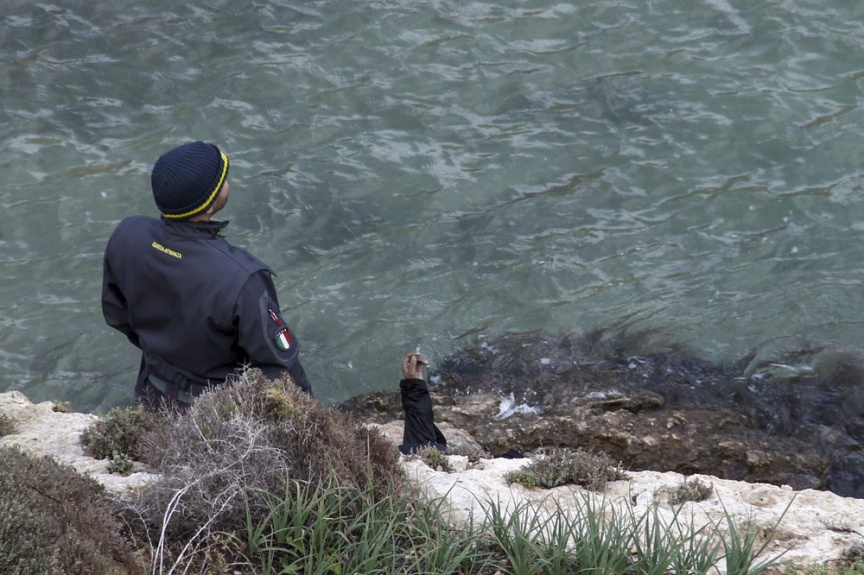 An arm of a migrant is seen as a border police officer stands by a woman's body recovered at sea near the Sicilian island of Lampedusa, southern Italy, Sunday, Nov. 24, 2019. Italian news reports say the Italian coast guard has recovered seven bodies of migrants near Lampedusa and kept up its search Sunday of rough seas for as many as 13 other migrants feared missing after their boat capsized on Saturday. (AP Photo/Mauro Seminara)

ROME (AP) — The bodies of five migrant women, two of them washed ashore, were recovered Sunday, the Italian coast guard said, as search efforts continued in rough seas near the tiny island of Lampedusa for around another dozen people feared missing in the capsizing of a fishing boat.

Three of the bodies were retrieved from the sea, where waves as high as three meters (10 feet) complicated the coast guard search by boat and helicopter.

The Italian news agency ANSA, reporting from the Italian Mediterranean island, had said that a total of seven bodies had been brought ashore by mid-day. Later, ANSA said the number of recovered corpses had been confirmed at five.

On Saturday, the coast guard said it had rescued 149 migrants after their foundering boat overturned. Once ashore, survivors told authorities that 169 had been originally crowded aboard the 10-meter (33-foot) long boat utilized by Libya-based migrant smugglers.

Survivors included a 1-year-old baby, two other children whose parents couldn’t immediately be located among the survivors, and 13 women, RAI said.

Often, those aboard traffickers’ boats in distress call for help, but this time no such request from those aboard was made, the coast guard said, adding that they were alerted by a private citizen.

Two fishermen who said bad weather kept their fleet from going out to sea on Saturday spotted the migrant’s struggling fishing boat.

Stefano Martello said he and his fellow fisherman were walking along a stretch of coast when “we understood immediately that the very high waves were about to knock over the boat,” ANSA reported.

“We called the coast guard port office, and (their) motorboats arrived within a few minutes,” Martello was quoted as saying. “It was this speediness that saved the migrants who in the meantime had fallen into the water. Without the immediate intervention of the motorboats, they all would have died.”

Risking their lives in hopes of a better future in Europe, hundreds of thousands of migrants have set out in recent years on decrepit fishing boats and flimsy rubber dinghies launched by the Libya-based traffickers.

In addition to two specialized rescue divers, also jumping into the sea from the coast guard vessel was the crew member in charge of the engine room, since so many people had tumbled into the sea at the same time.

“In the meantime, the coast guard crew who remained aboard took to throwing everything possible into the sea -- life preservers, floating buoys, sideboard bumpers and every other thing that could allow the shipwrecked to grab onto and save themselves from certain drowning,’’ the coast guard said in a statement.

Among the first to be pulled aboard, it said, was a visually impaired man who attracted the rescuers’ attention.

Docking at Messina, Sicily, on Sunday was the humanitarian rescue ship Ocean Viking, with 213 migrants aboard. The Italian government announced a day earlier that the port was assigned after four countries -- Italy, Malta, France and Germany -- asked the European Commission to start procedures to find fellow EU countries willing to take the migrants.

Italy and Malta have insisted they shouldn’t bear the burden of caring for the migrants while they seek asylum and have pitched for EU solidarity. Their insistence has sometimes kept charity rescue ships waiting at sea for days or weeks awaiting permission to disembark the migrants.

Germany and France are among several countries which agreed earlier this year to take some of the rescued migrants on a regular basis, replacing ad hoc solutions.

Last week, two migrants aboard Ocean Viking were evacuated to Malta. One was a woman pregnant with twins and the other a man with gunshot wounds from this time spent in Libya waiting to be smuggled by the traffickers aboard a boat for Europe.

Two humanitarian groups, Doctors Without Borders and SOS Mediterranee operate Ocean Viking. It wasn’t immediately known which EU countries might have offered to take some of the 213 migrants reaching Sicily.

4 EU nations to take in 64 migrants from aid ship