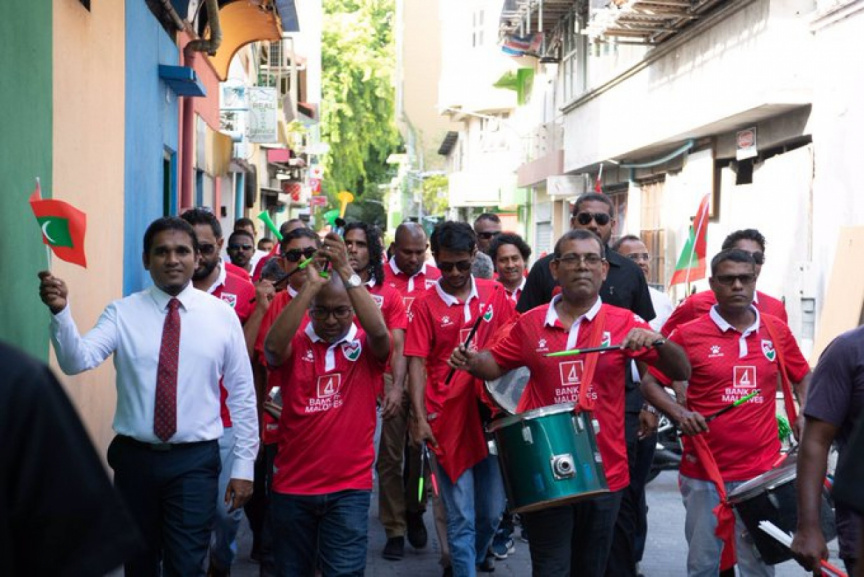 MPs on the way to the football match between the Maldives and the Philippines with drums and horns on November 14, 2019. (Photo/Parliament)

Speaker of the Parliament Mohamed Nasheed has called on all Maldivians to make time for the World Cup Qualification fixture between Maldives and Guam today.

Nasheed stated that he had no doubts that Maldives would win the match as he was making the opening statements of today’s Parliamentary session and expressed his dismay at the fact that the number of supporters visiting the National Stadium was decreasing day by day.

“It is a great wish for everyone to go to the stadium, to watch the match in the evening. To make time for football at that time,” said Nasheed. He also noted that the matches being played currently would help Maldives advance in world rankings and called on all Maldivians to get behind the national team.

The Speaker of the Parliament, as well as all MPs, have been invited to watch the match that is to be played at 16:00 today. Nasheed also called on all MPs to attend the match to support the team.

MPs also attended the match the Maldives played against the Philippines on November 14, with drums and horns to root for the team. The national team has a narrow chance of qualifying after suffering three consecutive defeats since the 1-0 away victory over today’s opponents, Guam. The match was the only one that the Maldives has so far won in the qualifying stages.

The Maldives has a massive support base for football, which is the most popular sport. The country was at its peak in the sport during the victorious Saff championship campaign in 2008. However, a slump in support for the local league, cups and even the national team matches has been noticed in the decade afterward.

HRCM: Juveniles must be separated from adults in jail