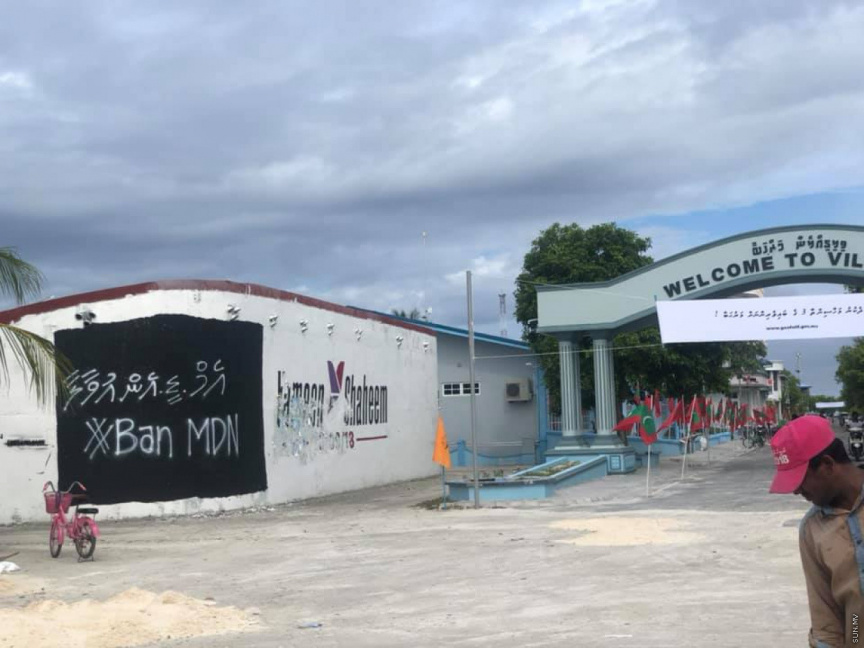 An anti-MDN banner on a wall at G. A. Vilingili. (Photo/Ibrahim Rasheed)

The police have questioned a number of locals from G. A. Vilingili who staged an anti-Maldivian Democracy Network (MDN) protest to coincide with Speaker of Parliament, former President Mohamed Nasheed’s visit to the island.

Nasheed arrived at Vilingili on Wednesday night, and was met with demonstrators calling for a ban on MDN and action against senior officials of the organization.

According to the police, the demonstration had been an illegal gathering because they hadn’t sought prior permission from the Vilingili Council, and had also entered an area cordoned off by the police for security reasons.

The police confirm that several of the demonstrators were summoned for questioning.

Vilingili Council president, Musthafa Mohamed told Sun this Thursday that it hadn’t been a true demonstration, but had been a few locals causing a ruckus.

Nasheed is in Vilingili to attend the symposium for the four southern-most atolls scheduled to begin at the island this Thursday.

The anti-MDN demonstration in Vilingili follows similar demonstrations across Maldives including the capital, Male’.

MDN had come under fire following its report – Preliminary Assessment on Radicalization in the Maldives – which was found to contain blasphemous content mocking the Islamic faith, the Holy Quran, and the Prophet.

The report has been condemned by the government, and is currently under investigation by the police.

The police have sought the assistance of three Islamic scholars to review the report. The review is expected to be completed within this week, upon which the police have promised to take action.

Meanwhile, the police have also issued a statement saying that several parties were exploiting the report to incite violence, and urging against such acts.