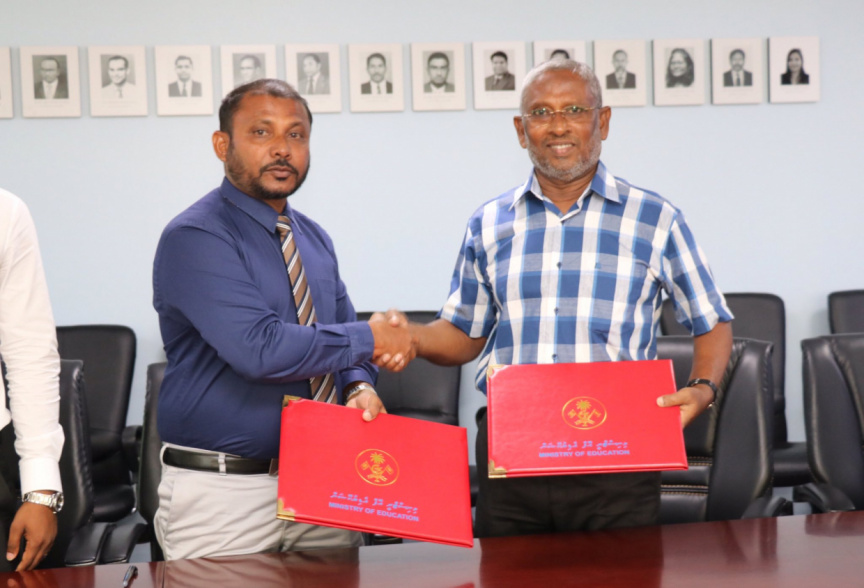 Ceremony to award the project for an eight-floor building in CHSE. (Photo/Education Ministry)

Education Ministry has contracted a company to build an eight-floor building on the site of the current Centre for Higher Secondary Education (CHSE).

A ceremony to award the project was held in the Education Ministry yesterday and the project was awarded to Rasheed Carpentry and Construction Pvt Ltd (RCNC). The agreement for the project was signed by State minister Ahmed Riyaz and Managing Director of RCNC Ibrahim Rasheed.

The project is to be finished within 420 days for MVR 33.4 million. The building is expected to be completed by the end of next year and usable by December 2020. This project is run by the PSIP budget of the government, according to the Education Ministry.

State Minister Riyaz stated that this would solve the issue of space currently faced by the higher secondary institute and will house the latest equipment.

CHSE principle Aishath Sofoora stated that the new building will be on the location that currently houses the two-floor building laboratories of the schools. The building has been closed by MNDF for nearly a year now after an assessment.

“Due to difficulties in space the labs are currently run in the building that houses the Physics lab and Aminiya building. We are also facing a lot of difficulties in classroom space as well. The new building will have laboratories, classrooms and office departments of the school as well.” Said Sofoora.

The Ministry has stated that the new building will have 19 classrooms and six laboratories. The school currently has 1100 students enrolled.

CHSE: Action was taken against teacher in 2017

''Idea that MDP is irreligious, not to be believed''